Forensic Pathology of Infancy and Childhood 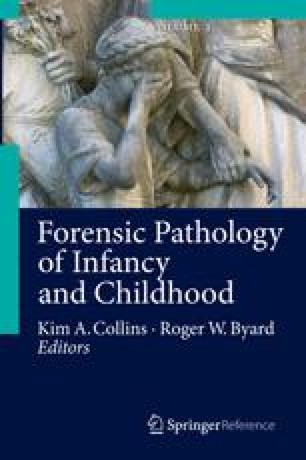 Forensic Pathology of Infancy and Childhood pp 327-337 | Cite as

Cardiopulmonary resuscitation (CPR) is an emergency intervention to maintain circulation and breathing in an unresponsive individual suffering from cardiopulmonary arrest. However, CPR is not without its own risks. Injuries secondary to compression and ventilation are well documented in the medical and scientific literature. Most of these injuries are minor, but some can result in significant morbidity and even death. It is important to identify those injuries that could be secondary to CPR versus inflicted traumatic injuries of child maltreatment.

Chest Compression Retinal Hemorrhage Visceral Injury Abusive Head Trauma Resuscitative Effort
These keywords were added by machine and not by the authors. This process is experimental and the keywords may be updated as the learning algorithm improves.
Download reference work entry PDF

Besides medical personnel, members of the general public have been trained to perform CPR. Manual external CPR involves chest compressions at a rate of at least 100 per minute for all age groups, at a depth of at least 5 cm in adults, and at least 1/3 of the depth of the anteroposterior chest diameter in infants and children below the age of puberty. Often a child is brought to the attention of a health-care professional or death investigator, and the etiology of injuries, in particular CPR versus inflicted blunt force trauma, becomes a crucial issue. Perpetrators may claim that injuries were caused by CPR, either by themselves or by emergency personnel. It is important to understand those injuries known to be secondary to CPR in order to better identify and classify inflicted injuries of child maltreatment.

Injuries secondary to CPR are usually pathophysiologically insignificant (Bush et al. 1996; Plunkett 2006; Matshes and Lew 2010a; Ryan et al. 2006; Matshes and Lew 2010b; Reyes et al. 2011). Such injuries may be external and/or internal. It is best to divide the injuries into categories: head and neck, thorax and abdomen, barotrauma, and iatrogenic artifacts. Most CPR injuries involve the head/neck and rarely the thorax and abdomen. These injuries are due to the compressions and to ventilation/intubation. One should be aware of the resuscitative technique used on children and note if the resuscitator is experienced in this technique (Reyes et al. 2011). The techniques include one-handed compressions (“two finger”), two-handed compressions (“two-thumb-encircling hands”), and abdominal compressions. The emergency medical services (EMS) personnel or physician can easily demonstrate how he/she performed CPR. The investigator can correlate injuries with points of contact during compressions and ventilation. A doll can be used as well as the same type and size of mask. If available, the exact mask used during the resuscitation should be retained. It must be noted that some studies of many resuscitated children report no injuries. In other studies, injuries were noted, but none were significant or abdominal (Matshes and Lew 2010a, b; Price et al. 2000; Feldman and Brewer 1984).

Reports of CPR in adults suggest fractures of the ribs occur at an incidence of 20–65 %, but such injuries are reportedly rarely seen in children (Ryan et al. 2006; Feldman and Brewer 1984; Krischer et al. 1987; Powner et al. 1984). Prior to the introduction of the preferred two-handed compression technique in 2006, there were only three reported cases of resuscitation-related injuries in children (Maguire et al. 2006). Compared to an adult, the rib cage of a child has greater elasticity and plasticity due to incomplete bone development and therefore may be able to tolerate larger degrees of pressure before a fracture occurs.

Rib fractures found in children with no clinical history of trauma or underlying bone disorders are most often associated with child abuse, accounting for 5–27 % of all skeletal injuries in abused children (Barsness et al. 2003; Platt et al. 2006). Most abusive rib fractures are believed to occur from anteroposterior compression, with the hands wrapped around the infant’s chest, produced by excessive squeezing or indirectly generated by shaking. Although abusive compression can cause anterolateral rib fractures, it has been attributed to injuries of the posterior ribs near the costovertebral junction and may involve the rib head, rib neck, and posterior rib arc. The compressive force levers the posterior ribs over the transverse processes of the spine (Kleinman and Schlesinger 1997; Bulloch et al. 2000). Since one-handed CPR is typically performed with the child on a firm surface, this posterior levering should not occur.

When rib fractures are present in an infant who has received CPR, the forensic pathologist must take care to distinguish abusive fractures from those that are related to resuscitative efforts. This is especially true with the two-handed technique, given that significant anterior compression may be produced (Matshes and Lew 2010a; Reyes et al. 2011). Resuscitation-related rib fractures are usually located either anteriorly or anterolaterally and are often multiple, linear, bilateral, or symmetrical (Fig. 14.7). These fractures usually occur near ribs 4 and 5 but have also been reported in ribs 2 through 9, the clavicle, and the sternochondral junction (Bush et al. 1996; Betz and Liebhardt 1994). If resuscitative efforts are unsuccessful, CPR-induced posterior rib fractures often have minimal associated hemorrhage and may be difficult to identify unless the parietal pleura has been reflected (Fig. 14.8).

To detect and confirm the presence of rib fractures at autopsy, a radiologic skeletal survey consisting of full-body, anteroposterior radiographs should always be performed prior to beginning the autopsy. Fresh rib fractures may be missed by radiography, but can be detected at autopsy by stripping the parietal pleura from the thorax and carefully examining each rib by visual inspection and manual palpation. Often the rib fractures will be subtle, bending or buckle fractures, with little or no associated hemorrhage. Microscopic examination of resuscitation-related fractures should show no surrounding tissue reaction with minimal associated extravasated blood histologically (Dolinak 2007; Weber et al. 2009).

Although usually pathologically insignificant, injuries secondary to CPR do occur and must be distinguished from inflicted injuries of child maltreatment. The investigator must be aware of common injuries of CPR and how these may differ from abusive trauma. Knowledge of the type of resuscitation, mask, and intubation instruments used is needed to assess any injuries that may be identified. Doll reenactment may be useful during the investigation. Special attention should be paid to bony fractures and visceral injury as these are not commonly identified as secondary to CPR. Also, any remote injuries should raise suspicion. A complete autopsy preceded by radiologic skeletal survey should be performed.