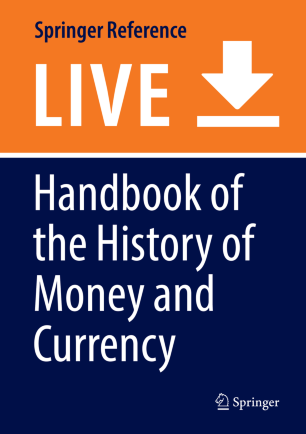 Handbook of the History of Money and Currency

This handbook provides a comprehensive overview of the state-of-art research in the field of monetary history. The authors comprise a collection of leading academics from universities worldwide. Thanks to its unrivaled breadth both in time (from antiquity to the present) and geographical coverage (from Europe to the Americas, Asia, and Africa), the volume is set to become a key reference for historians, economists, and social scientists with an interest in the subject. The handbook reflects the existing variety of scholarly approaches in the field, from the history of monetary thought to the political economy of monetary institutions, from cultural perspectives on money to theoretically driven macroeconomic history. Section 1 examines the commodity money era (from ancient times to the nineteenth century) and Section 2 deals with the fiat money era (nineteenth and twentieth centuries). The volume also provides readers with a survey of existing datasets for the study of money and currency in historical perspective.

Stefano Battilossi, born in 1961, is Associate Professor of Economic History and Jean Monnet Chair of History of European Monetary and Financial Integration at University Carlos III Madrid. He received a MSc in Financial Analysis from UC3M and a PhD in History from Turin University. His research mainly contributes to the history of international banking, banking crises, financial regulation/liberalization and fiscal policy, with a focus on Western Europe in the 19th-20th centuries. He has published in journals such as The Economic History Review, European Review of Economic History and Cliometrica. He has edited the volumes European Banks and the American Challenge. Competition and Cooperation in International Banking under Bretton Woods (with Y. Cassis, OUP, 2002), and State and Financial Systems in Europe and the USA. Historical Perspectives on Regulation and Supervision (with J. Reis, Ashgate, 2010). He served as a Trustee of the European Historical Economics Society (EHES) (2006-2014) and is Chief Editor of Financial History Review (Cambridge University Press) since 2010.

Youssef Cassis, born in 1952, is Professor of Economic History at the European University Institute. His work mainly focuses on banking and financial history, as well as business history more generally. His latest publications include Capitals of Capital. A History of International Financial Centres, 1780-2005, (Cambridge University Press, 2006, 2nd revised edition, 2010), Crises and Opportunities. The Shaping of Modern Finance (Oxford University Press, 2011), and with Philip Cottrell, Private Banking in Europe. Rise, Retreat, and Resurgence (Oxford University Press, 2015). He was the cofounder, in 1994, of Financial History Review (Cambridge University Press). He was a long serving member of the Academic Advisory Council of the European Association for Banking and Financial History (EABH)) and past President (2005-2007) of the European Business History Association (EBHA).