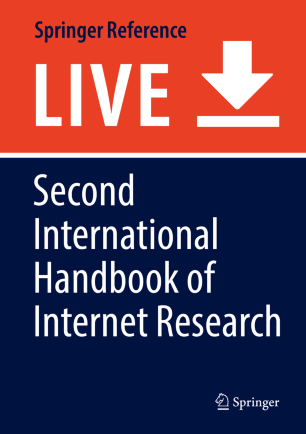 This Handbook is a detailed introduction to the numerous academic perspectives that apply to the study of the internet as a political, social and communicative phenomenon. Covering both practical and theoretical angles, established researchers from around the world discuss everything: the foundations of internet research appear alongside chapters on understanding and analyzing current examples of online activities and artifacts. The material covers all continents and explores in depth subjects such as networked gaming, economics and the law. The sheer scope and breadth of topics examined in this volume, which ranges from on-line communities to e-science via digital aesthetics, are evidence that in today’s world, internet research is a vibrant and mature field in which practitioners have long since stopped considering the internet as either an utopian or dystopian "new" space, but instead approach it as a medium that has become an integral part of our everyday culture and a natural mode of communication.​ This Second International Handbook of Internet Research is an updated version of the first International Handbook of Internet Research that came out in 2010. Since then, the field has changed, and this new version retains a number of the key updated chapters from the first handbook, as well as completely new chapters.

Jeremy Hunsinger is an Associate Professor in Communication Studies at Wilfrid Laurier University. He holds a Ph.D. in Science and Technology Studies from Virginia Tech where he co-directed the Center for Digital Discourse and Culture.He was co-editor of the journal Learning Inquiry and has published in FastCapitalism, The Information Society, Social Epistemology and other leading academic journals. He recently also co-edited a special issue on The Democratization of Hacking and Making. He also co-edited the International Handbook of Virtual Learning Environments and the International Handbook of Internet Research and has edited or contributed to several other volumes.

Lisbeth Klastrup is an Associate Professor at the IT University of Copenhagen. Her research areas include social media use, digital culture and transmedial worlds. She has published numerous articles and book chapters within the field, and was co-editor of the first Danish book on digital media analysis. She co-edited the first International Handbook of Internet Research. She is author of Sociale Netværksmedier (Social Network Media), 2016. She often appears as digital media expert in the Danish news media.

Matthew Allen is Professor of Internet Studies at Deakin University. His research focuses on the meaning and cultural reception of digital media technologies, particularly as they become part of our historical cons

ciousness. He is also a leader in online education, with a national teaching award. He co-edited the first International Handbook of Internet Research, has more than 50 papers and articles, including several that describe the key moment in the transformation of the Internet and media through the emergence of Web 2.0.