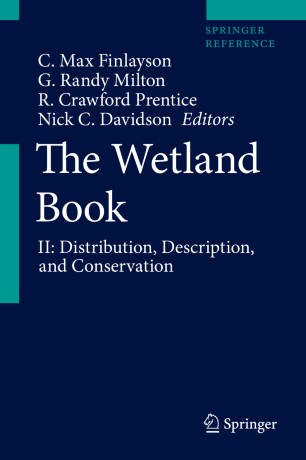 The Wetland Book is a comprehensive resource aimed at supporting the trans- and multidisciplinary research and practice which is inherent to this field. Aware both that wetlands research is on the rise and that researchers and students are often working or learning across several disciplines, The Wetland Book is a readily accessible online and print reference which will be the first port of call on key concepts in wetlands science and management. This easy-to-follow reference will allow multidisciplinary teams and transdisciplinary individuals to look up terms, access further details, read overviews on key issues and navigate to key articles selected by experts.

Max Finlayson is an internationally renowned wetland ecologist with extensive experience internationally in water pollution, agricultural impacts, invasive species, climate change, and human well-being and wetlands. He has participated in global assessments such as those conducted by the Intergovernmental Panel for Climate Change, the Millennium Ecosystem Assessment, and the Global Environment Outlook 4 & 5 (UNEP). Since the early 1990s he has been a technical adviser to the Ramsar Convention on Wetlands and has written extensively on wetland ecology and management. He has also been actively involved in environmental NGOs and from 2002-07 was President of the governing council of global NGO Wetlands International. He has contributed to over 300 journal articles, reports, guidelines, proceedings and book chapters on wetland ecology and management. He has contributed to the development of concepts and methods for wetland inventory, assessment and monitoring, and undertaken many site-based assessments in many countries.

Nick Davidson was the Deputy Secretary General of the Ramsar Convention on Wetlands from 2000 to 2014, with overall responsibility for the Convention's global development and delivery of scientific, technical and policy guidance and advice and communications as the Convention Secretariat’s senior advisor on these matters. He has long-standing experience in, and a strong commitment to, environmental sustainability supported through the transfer of environmental science into policy-relevance and decision-making at national and international scales. Nick currently works as an independent expert consultant on wetland conservation and wise use.

Randy Milton is the Manager for the Ecosystems and Habitats Program with Nova Scotia’s Department of Natural Resources in Canada. Randy is an ecologist and Certified Wildlife Biologist® with 35 years’ experience in public and industry conservation and environmental management, especially with freshwater and coastal wetlands and forest ecosystems. He has maintained an involvement in regional and national wetland conservation efforts since the early 1990s, as well as internationally first as a volunteer with WWF (Indonesia) in the mid-1980s and subsequently as a technical advisor to the Ramsar Convention on Wetlands (2000-2015), a contributing author to the Millennium Ecosystem Assessment, and a member (2005-2014) of the International Plan Committee for the North American Waterfowl Management Plan. Randy has a M.Sc. from Acadia University (Canada) where he is an Adjunct Professor, and an Adjunct Research Associate at the Institute for Land, Water and Society, Charles Sturt University, Australia.

Crawford Prentice is an independent consulting ecologist based in Cambridge, England. He has some 30 years of biodiversity conservation experience and has led global, regional and national programmes and projects mainly in Asia, the CIS countries and Europe. He studied Zoology at the University of Aberdeen and subsequently completed his M.Sc. in Aquatic Resource Management at Kings College, University of London. Much of his professional life has concerned the conservation and management of wetlands and migratory waterbirds, with early beginnings at the Wildfowl and Wetlands Trust and the International Waterfowl and Wetlands Research Bureau (IWRB) analysing International Waterfowl Census data, evolving to conservation programme management at the Asian Wetland Bureau and IWRB, and leading a bilateral aid project for the integrated management of Malaysia’s first Ramsar site in the 1990s. During the next decade, he worked with the International Crane Foundation on the design and implementation of the UNEP/GEF Siberian Crane Wetland Project, helping to strengthen management of seven million hectares across sixteen wetland sites in four countries for this flagship species and other biodiversity. He remains a project associate with ICF, contributing to climate change adaptation planning for key wetland nature reserves in north-eastern China and wider efforts for crane conservation. Currently, Crawford conducts consultancy assignments for the preparation, implementation and evaluation of GEF projects on integrated ecosystem management of wetlands, mountains and tropical forests