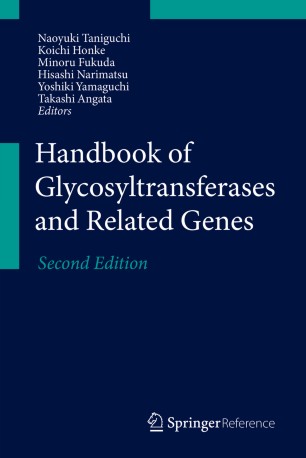 Handbook of Glycosyltransferases and Related Genes

This handbook, now in a new, second edition, is an essential resource for scientists with an interest in the role of glycosyltransferases and related genes involved in the biosynthesis of glycoproteins, glycolipids, and proteoglycans.

A functional glycomics approach using gene targeting in mice and analytical methods utilizing glycan arrays, lectin arrays, HPLC, and mass spectrometry identified the target glycoprotein(s) on which glycans are attached by the catalytic reaction of glycosyltransferases. Most of the target proteins have been shown to be cell surface membrane proteins such as growth factor receptors and transporters. The three-dimensional structures of some glycosyltransferases have also been characterized, making it possible to classify them into retaining and inverting enzymes. Such structural information is also included in this invaluable new edition.

Naoyuki Taniguchi graduated from the Faculty of Medicine, Hokkaido University, and obtained his M.D. degree in 1967 and then his Ph.D. from the same university in 1972. He became an assistant professor in the Department of Preventive Medicine, Hokkaido University, and a visiting associate professor at the Cornell University Medical School, New York, in 1976. After returning to Japan, he became an associate professor at the Cancer Institute, Hokkaido University Medical School. In 1986 he became professor and chair of the Department of Biochemistry, Osaka University Medical School. After retirement from the medical school in 2006, he became an endowed chair professor at Osaka University. In the meantime, he launched the Systems Glycobiology Research Group at RIKEN, Advanced Science Institute (the former Frontier Science Program), in 2007, and since that time he has been the group director. He is focusing on the structure and function of glycans, especially the role of N-linked glycoproteins in relation to the mechanism of disease, biomarker discovery and therapeutics.

Dr. Taniguchi has published more than 500 papers in peer-reviewed journals and has served as chief editor for the Journal of Biochemistry. He has been an editorial board member for many journals such as Biochemical and Biophysical Research Communications , The Journal of Biological Chemistry, Proteomics, Glycobiology, and Glycoconjugate Journal, among others.

Koichi Honke graduated from the Faculty of Medicine, Hokkaido University School, obtaining his M.D. there in 1983. Since he began his research at the Cancer Institute of the Hokkaido University Medical School in 1984 he has been studying the metabolism and function of glycolipids as well as glycoproteins. He worked at the Osaka Medical Center for Maternal and Child Health as chief researcher from 1995 to 1999 and in the Department of Biochemistry, Osaka University Medical School, as associate professor from 1999 to 2003. He was then promoted to full professor at the Kochi University Medical School in 2003. His major contribution has been purification, molecular cloning, and gene targeting of a glycan sulfotransferase responsible for the biosynthesis of sulfatides and discovery of the Gal 3-O-sulfotransferase gene family. His research focus now has shifted to the biogenesis of membrane microdomains with the establishment of a novel labeling method called EMARS for identification of cell surface molecular clustering in living cells.

Minoru Fukuda is a professor at the Sanford-Burnham Medical Research Institute in La Jolla, California, and an adjunct professor in the Department of Pathology at the University of California, San Diego. Dr. Fukuda earned his Ph.D. in biochemistry from the University of Tokyo in 1973 and completed post-doctoral research training at the Yale University School of Medicine. He was an assistant professor at the University of Washington and the Fred Hutchinson Cancer Research Center in Seattle, Washington, working with Dr. Senichiro Hakomori, before he was recruited to the Burnham Institute as director of the glycobiology program in 1984. In 1994–1995, Dr. Fukuda was also the biochemistry chair of the Institute of Medical Science, the University of Tokyo. Dr. Fukuda has published more than 280 original scientific papers, authored and edited many books, and served as executive editor and associate editor for Biochimica et Biophysica Acta (BBA) and Cancer Research, respectively. Dr. Fukuda received the Karl Meyer Award given by the Society for Glycobiology, The Mizutani Award, MERIT Award and Program Project Grant, and recently, the Alliance of Glycobiologists for Detection of Cancer from the National Cancer Institute, National Institutes of Health (NIH). His research focus is on the structure, biosynthesis, and function of glycoproteins. He is particularly interested in the tumor suppresser function of carbohydrates and heparan sulfate for cellular signals in cell–cell interaction.

Hisashi Narimatsu is a founder and the director of the Research Center of Medical Glycoscience (RCMG), a part of the National Institute of Advanced Industrial Science and Technology (AIST) in Japan, and is energetically leading comprehensive activities in glycoscience. He graduated from the School of Medicine and the Graduate School of Medicine at Keio University, where he received his M.D. and Ph.D., respectively. He successfully cloned the first glycosyltransferase, 1,4-galactosyltransferase, during his postdoc at the U.S. National Institutes of Health (NIH), and thereafter he has continued to devote his scientific career to finding and cloning many new glycosyltransferases. In 2000, he joined AIST and since then has been leading three national projects, i.e., the Glycogene Project, the Structural Glycomics Project, and the Medical Glycomics Project, to facilitate the progress of glycoscience.

Yoshiki Yamaguchi received his Ph.D. in 1998 at the Graduate School of Pharmaceutical Sciences, the University of Tokyo (under Professors Ichio Shimada and Yoji Arata). He continued his research as a postdoctoral research fellow and then as a research associate in the same group. From 2001 to 2007, he was a lecturer at Nagoya City University (under Professor Koichi Kato) and then moved to his current position at RIKEN, the Systems Glycobiology Research Group, as a team leader of the Structural Glycobiology Team. His current study focuses on structural analyses of glycoproteins and glycan-related proteins. He has been holding posts concurrently at Nagoya City University (from 2007) and at Tokyo Medical and Dental University (from 2008) as a visiting professor. He received Young Scientist Awards from GlycoTOKYO in 2006 and from the Japanese Society of Carbohydrate Research in 2007.

Takashi Angata received a Ph.D. degree in biochemistry from the Graduate School of Science, the University of Tokyo, in 1998. He has served as post-doctoral fellow to Professor Ajit Varki at the University of California, San Diego (1998–2003), research scientist at the National Institute of Advanced Industrial Science and Technology (AIST) in Japan (2003–2009), specially appointed associate professor at Osaka University (2009–2011), and now as team leader at the RIKEN Advanced Science Institute (2011–present).

Dr. Angata was a major contributor in the expansion of the Siglec family of sialic acid recognition proteins and made several seminal discoveries in the field, such as the concerted evolution of activating and inhibitory Siglecs as paired receptors. His current research is focused on the role of activating Siglecs in innate immunity and chronic diseases.