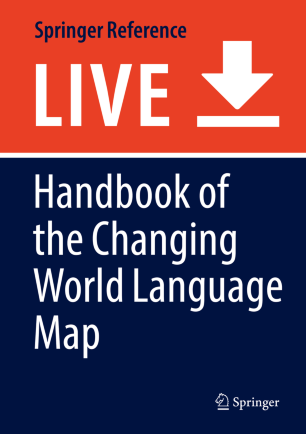 This reference work delivers an interdisciplinary, applied spatial and geographical approach to the study of languages and linguistics. This work includes chapters and sections related to language origins, diffusion, conflicts, policies, education/instruction, representation, technology, regions, and mapping. Also addressed is the mapping of languages and linguistic diversity, on language in the context of politics, on the relevance of language to cultural identity, on language minorities and endangered languages, and also on language and the arts and non-human language and communication. This reference work looks at the subject matter and contributors to the disciplines and programs in the social sciences and humanities, and the dearth of materials on languages and linguistics. The topics covered are not only discipline-centered, but in the cutting-edge fields that intersect several disciplines and also cut across the social sciences and humanities. These include gender studies, sustainability and development, technology and social media impacts, law and human rights, climate change, public health and epidemiology, architecture, religion, visual representation and mapping. These new and emerging research directions and other intersecting fields are not traditionally discipline-bounded, but cut across numerous fields. The volumes will appeal to those within existing fields and disciplines and those working the intersections at local, regional and global scales.

Dr. Brunn has edited many books on world urbanization, social geography, political geography, terrorism and post 9-11, e-commerce, Wal-Mart, geography and time/space issues, law and justice, human/environmental issues, disciplinary history, image and representation, and several atlases (Michigan, US elections and Central Asia). In addition to these he has published many articles and chapters in the past half-century and made more than 100 presentations at national and international conferences. In addition to writing, he has edited two of geography’s flagship journals (Annals of the American Association of Geographers and The Professional Geographer), taught classes in almost twenty different countries and reviewed dozens of research proposals, articles, books and manuscripts.

Dr. Roland Kehrein is a scholar of German Linguistics specializing in variation and change of regional languages. He has written and edited several books on this and related topics in the last decade. Among these are two international handbooks: Regionale Variation des Deutschen. Projekte und Perspektiven (2015) and Language and Space: An International Handbook of Linguistic Variation. Vol. 2: Language Mapping (2010) (two volumes) published in the well-known series Handbooks of Linguistics and Communication Science. Since 2016 he is chief editor of the academic journal/book series Germanistische Linguistik. Besides these publications he has written numerous articles in the field and he is continuously presenting his research at relevant international conferences. Finally, he is regularly involved in review processes for conference contributions, articles and research proposals.