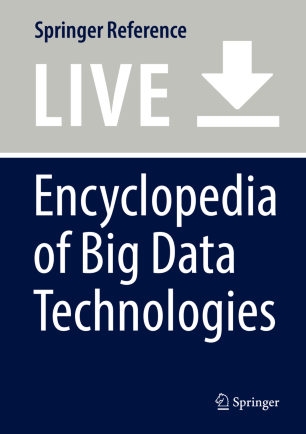 The Encyclopedia of Big Data Technologies provides IT professionals, educators, researchers and students with a comprehensive set of definitions covering the most relevant Big Data technologies. The encyclopedia articles will be authored by a worldwide subject matter experts in industry and academia, this unique publication, in multiple volumes, covers a wide range of Big Data topics. The editorial board of the encyclopedia consists of 35 well-respected scholars. The sections are designed to capture the most relevant terms and assigned to experts that develop articles in a consistent and standardized way.

This extensive reference work answers the need for solid and comprehensive research source in the domain of big data technologies. The encyclopedia will not be focused only on one discipline, research area or one type of data. It will cover all related technical disciplines for big data technologies such as big data storage systems, NoSQL database, cloud computing, distributed systems, machine learning and social technologies. In particular, this encyclopedia will provide comprehensive reading materials for a large range of audiences and has potential to influence readers to think further and investigate the area that are novel to them.

Sherif Sakr is the Head of Data Systems Group at the Institute of Computer Science, University of Tartu. He received his PhD degree in Computer and Information Science from Konstanz University, Germany in 2007. He received his BSc and MSc degrees in Computer Science from the Information Systems department at the Faculty of Computers and Information in Cairo University, Egypt, in 2000 and 2003 respectively. During his career, Prof. Sakr held appointments in several international and reputable organizations including University of New South Wales, Macquarie University, Data61/CSIRO, Microsoft Research, Nokia Bell Labs and King Saud bin Abdulaziz University for Health Sciences.

Albert Y. Zomaya is currently the Chair Professor of High Performance Computing & Networking in the School of Information Technologies, University of Sydney. He is also the Director of the Centre for Distributed and High Performance Computing which was established in late 2009. Dr. Zomaya was an Australian Research Council Professorial Fellow during 2010-2014 and held the CISCO Systems Chair Professor of Internetworking during the period 2002–2007 and also was Head of school for 2006–2007 in the same school.

Prior to his current appointment he was a Full Professor in the Electrical and Electronic Engineering Department at the University of Western Australia, where he also led the Parallel Computing Research Laboratory during the period 1990–2002. He served as Associate–, Deputy–, and Acting–Head in the same department, and held numerous visiting positions and has extensive industry involvement.

Dr. Zomaya published more than 600 scientific papers and articles and is author, co-author or editor of more than 20 books. He served as the Editor in Chief of the IEEE Transactions on Computers (2011-2014). Currently, he serves as a Founding Editor-in-Chief for the IEEE Transactions on Sustainable Computing, a Co-Founding Editor in Chief of the IET Cyber-Physical Systems: Theory and Applications, Associate Editor-in-Chief (Special Issues), Journal of Parallel and Distributed Computing.

Dr. Zomaya has delivered more than 180 keynote addresses, invited seminars, and media briefings and has been actively involved, in a variety of capacities, in the organization of more than 700 conferences.

Dr. Zomaya is a Fellow of the IEEE, the American Association for the Advancement of Science, the Institution of Engineering and Technology (UK). He is a Chartered Engineer and an IEEE Computer Society’s Golden Core member. He received the 1997 Edgeworth David Medal from the Royal Society of New South Wales for outstanding contributions to Australian Science. Dr. Zomaya is the recipient of the IEEE Technical Committee on Parallel Processing Outstanding Service Award (2011), the IEEE Technical Committee on Scalable Computing Medal for Excellence in Scalable Computing (2011), the IEEE Computer Society Technical Achievement Award (2014), and the ACM MSWIM Reginald A. Fessenden Award (2017). His research interests span several areas in parallel and distributed computing and complex systems. More information can be found at http://www.it.usyd.edu.au/~azom0780/.