Encyclopedia of Sexuality and Gender 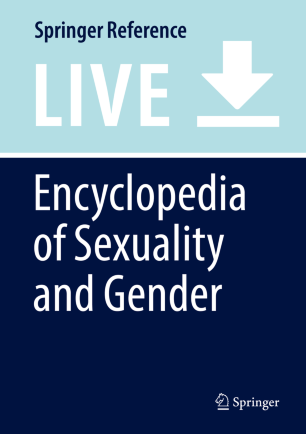 This Encyclopedia contains five sections. The first section, Sexual Behavior, includes types of sexual behaviors (clinical and non-clinical), and behaviors and media associated with sexual behavior, including pornography and laws related to regulating sexual behavior. The second section, Sexual Orientation, reviews the many aspects of what is known about sexual attraction, sexual orientation and identity, and what is known about its development. Section three, Relationships and Reproduction, covers what is known about pair-bonding, mate choice, and sexual/romantic relationships across the animal kingdom, as well as pregnancy and reproduction. Section four, Gender, reviews topics such as what is gender and gender identity, cross-cultural aspects of gender and gender identity, and sex reassignment. Lastly, section five, Sexuality and Gender Science, reviews the history of sexuality and gender science (including its major contributors), typical research methodologies, and research societies and journals whose focus is related to sexuality and/or gender research.