Encyclopedia of Systems and Control 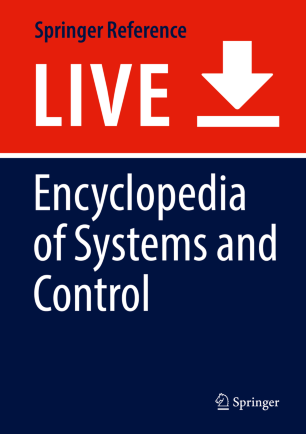 The Encyclopedia of Control collects a broad range of short expository articles that describe the current state of the art in the central topics of control and systems engineering as well as in many of the related fields in which control is an enabling technology. The editors have assembled the most comprehensive reference possible, and this has been greatly facilitated by the publisher’s commitment continuously to publish updates to the articles as they become available in the future. Although control engineering is now a mature discipline, it remains an area in which there is a great deal of research activity, and as new developments in both theory and applications become available, they will be included in the online version of the encyclopedia. A carefully chosen team of leading authorities in the field has written the more than 200 articles that comprise the work. The topics range from basic principles of feedback in servomechanisms to advanced topics such as the control of Boolean networks and evolutionary game theory. Because the content has been selected to reflect both foundational importance as well as subjects that are of current interest to the research and practitioner communities, a broad readership that includes students, application engineers, and research scientists will find material that is of interest.