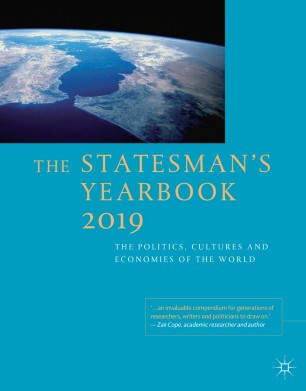 THE STATESMAN’S YEARBOOK 2019 This classic reference work presents a political, economic and social account of every country of the world together with facts and analysis. The 2019 edition includes:

·         Revised and updated biographical profiles of all current leaders

·         SPECIAL FEATURE: The Russian Challenge to the European Security Environment by Roger Kanet

Palgrave Macmillan is a global academic publisher for scholarship, research and professional learning. We publish monographs, journals, reference works and professional titles, online and in print. With a focus on humanities and social sciences, Palgrave Macmillan offers authors and readers the very best in academic content whilst also supporting the community with innovative new formats and tools.