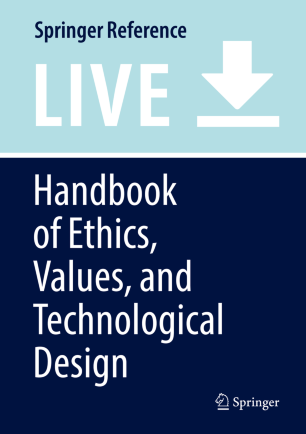 This handbook enumerates every aspect of incorporating moral and societal values into technology design, reflects the fact that the latter has moved on from strict functionality to become sensitive to moral and social values such as sustainability and accountability. Aimed at a broad readership that includes ethicists, policy makers and designers themselves, it proffers a detailed survey of how technological, and institutional, design must now reflect awareness of ethical factors such as sustainability, human well-being, privacy, democracy and justice, inclusivity, trust, accountability, and responsibility (both social and environmental). Edited by a trio of highly experienced academic philosophers with a specialized interest in the ethical dimensions of technology and human creativity, this syncretic handbook collates an array of published material and offers a studied, practical introduction to the field. The volume addresses myriad aspects at the intersection of technology design and ethics, enabling designers to adopt a constructive approach in anticipating, preventing, and resolving societal and ethical issues affecting their work. It covers underlying theory; discrete values such as democracy, human well-being, sustainability and justice; and application domains themselves, which include architecture, bio- and nanotechnology, and military hardware. As the first exhaustive survey of a field whose importance is characterized by almost exponential growth, it represents a compelling addition to a formerly atomized literature. ​

Ibo van de Poel is AvL Professor in Ethics and Technology at Delft University of Technology. His research focuses on engineering ethics, the moral acceptability of technological risks, values and engineering design, moral responsibility in research networks and ethics of new emerging technologies like nanotechnology. He is co-editor of the Handbook of Philosophy of Technology and the Engineering Sciences (Elsevier, 2009), Philosophy and Engineering (Springer, 2010), Moral Responsibility. Beyond Free Will And Determinism (Springer, 2011) and co-author of Ethics, Engineering and Technology (Wiley-Blackwell, 2011). He has a VICI grant for his research proposal New Technologies as Social Experiments: Conditions for Morally Responsible Experimentation from the Netherlands Organisation for Scientific Research (NWO).