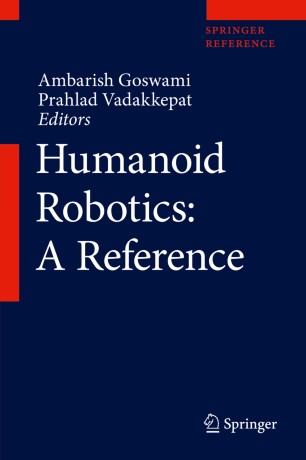 Humanoid Robotics: a Reference provides a comprehensive compilation of developments in the conceptualization, design and development of humanoid robots and related technologies. Human beings have built the environment they occupy (living spaces, instruments and vehicles) to suit two-legged systems. Building systems, especially in robotics, that are compatible with the well-established, human-based surroundings and which could naturally interact with humans is an ultimate goal for all researches and engineers. Humanoid Robots are systems (i.e. robots) which mimic human behavior. Humanoids provide a platform to study the construction of systems that behave and interact like humans. A broad range of applications ranging from daily housework to complex medical surgery, deep ocean exploration, and other potentially dangerous tasks are possible using humanoids. In addition, the study of humanoid robotics provides a platform to understand the mechanisms and offers a physical visual of how humans interact, think, and react with the surroundings and how such behaviors could be reassembled and reconstructed. Currently, the most challenging issue with bipedal humanoids is to make them balance on two legs, The purportedly simple act of finding the best balance that enables easy walking, jumping and running requires some of the most sophisticated development of robotic systems- those that will ultimately mimic fully the diversity and dexterity of human beings. Other typical human-like interactions such as complex thought and conversations on the other hand, also pose barriers for the development of humanoids because we are yet to understand fully the way in which we humans interact with our environment and consequently to replicate this in humanoids.