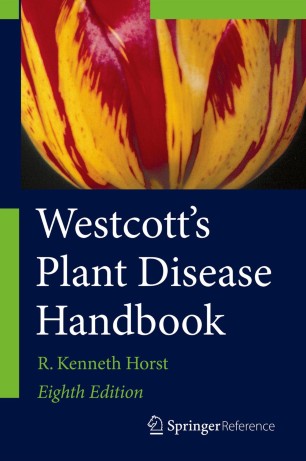 Westcott’s Plant Disease is a reference book on diseases which attack plants. Diseases of plants are found on most all plants including trees, shrubs, grasses, forage, fruits, vegetables, garden and greenhouse plants as well as native wild flowers and even weeds. The Plant Disease Handbook identifies various types of diseases which are known to invade these plants located throughout North and South America. The recordings include diseases caused by fungi, bacteria, viruses, viroids and nematodes. Causal disease agents are described and illustrated in many cases and diseases and disease control measures are also discussed. A book such as this is never finished since new reports of diseases are continuously reported. This includes new diseases and previously known diseases which occur on both presently recorded plants and on new plants found to be susceptible to diseases. For example, in the year 2010 more than 140 new diseases were reported throughout North and South America. Westcott’s Plant Disease handbook provides a reference and guide for identification and control of these plant disease problems.

Dr. Horst received his BS degree from Ohio University in Plant Science in 1957; his MS and Ph.D. degrees from Ohio State University in Plant Pathology in 1959 and 1962 respectively.  He was Director of the Plant Pathology Laboratory at Yoder Bros. in Barberton, Ohio, 1962-1968.  In 1968 he was appointed Assistant Professor of Plant Pathology at Cornell University.  He subsequently became Associate Professor in 1974 and Full Professor in 1980.  In addition to research, teaching and extension responsibilities, he also served as advisor for masters and doctoral students.  He has authored or co-authored more than 230 articles which include books, book chapters and invitational papers, and has guest lectured nationally and internationally. Horst wrote the 4th, 5th, 6th and 7th editions of Westcott's Plant Disease Handbook, the 1st edition of the Compendium of Rose Diseases, the Compendium of Chrysanthemum Diseases and the 2nd edition of the Compendium of Rose Diseases and Pests.  He is presently President and CEO of H&I Agritech, Inc., which develops biocompatible (environmentally safe) pesticides for disease and pest control.