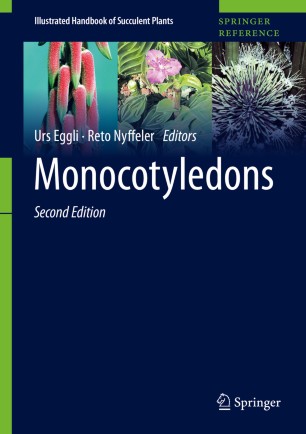 This second edition provides a comprehensive list of the latest taxonomy including the updated relevant plant data. All succulent species of the monocotyledonous plant families and genera are described in detail.

This work will be particularly useful to botanists, plant taxonomists and scholars as well as to herbaria and botanic gardens. It will also appeal to the committed collector of succulent plants, horticultural cognoscenti and succulent plant lovers.

Dr. Urs Eggli studied botany at the University of Zürich and produced a monographic study of the genus Rosularia (Crassulaceae) for his Ph.D. Subsequently he became scientific assistant at the Sukkulenten-Sammlung Zürich, Switzerland, where he continues to curate the herbarium and is responsible for public education, special exhibits, and all aspects of information dissemination. His main focus of interest is the diverse biological aspects of succulent plants. Dr. Eggli is an expert in the classification of succulents, especially of the families Crassulaceae and Cactaceae, and a specialist of nomenclature. He traveled widely to study succulent plants in habitat, especially in Latin America. His numerous publications cover a diversity of aspects of the biology of succulent plants. Since 1995 he is editor of the annual Repertorium Plantarum Succulentarum. During 2001–2003 he edited four volumes of the first edition of the present series, and in 2005 he translated and revised a monograph of the Cactaceae. Dr. Eggli was awarded the Cactus d’Or by the International Organization for Succulent Plant Study in 2015.

Dr. Reto Nyffeler studied biology at the University of Zürich. In 1997 he received a doctor’s degree with a Ph.D. thesis on the systematics of the tribe Notocacteae (Cactaceae) from South America. Subsequently, he spent 4 years as a postdoctoral student at Harvard University and Stanford University and conducted during that stay the first comprehensive molecular phylogenetic study of Cactaceae. Since 2002 he is curator for the vascular plant collections at the United Herbaria of the University and ETH Zurich, and he is a lecturer for plant systematics at the Department of Systematic and Evolutionary Botany, University of Zurich. His research focuses on the systematics of succulent plants and on the history of botany. During the past two decades he published several papers on succulents from different plant families in collaboration with Dr. Urs Eggli.