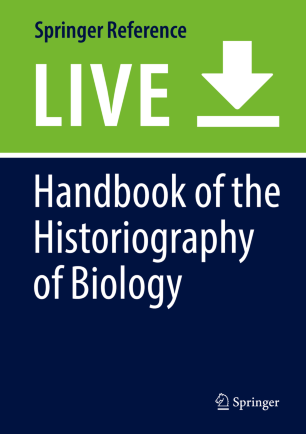 Handbook of the Historiography of Biology

Part of the Historiographies of Science book series (HISTSC, volume 1)

This handbook offers original, critical perspectives on different approaches to the history of biology. This collection is intended to start a new conversation among historians of biology regarding their work, its history, and its future. Historical scholarship does not take place in isolation: As historians create their narratives describing the past, they are in dialogue not only with their sources but with other historians and other narratives. One important task for the historian is to place her narrative in a historiographic lineage. Each author in this collection offers their particular perspective on the historiography of a range of topics from Model Organisms to Eugenics, Molecular Biology to Biotechnology, Women, Race, Scientific Biography, Genetics, Darwin and more. Rather than comprehensive literature reviews, the essays critically reflect upon important historiographic trends, offering pointed appraisals of the field by leading scholars. Other authors will surely have different perspectives, and this is the beauty and challenge of history-making. The Handbook of the Historiography of Biology presents an opportunity to engage with each other about how the history of biology has been and will be written.