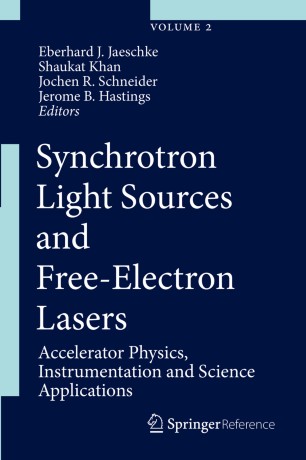 Hardly any other discovery of the nineteenth century did have such an impact on science and technology as Wilhelm Conrad Röntgen’s seminal find of the X-rays. X-ray tubes soon made their way as excellent instruments for numerous applications in medicine, biology, materials science and testing, chemistry and public security. Developing new radiation sources with higher brilliance and much extended spectral range resulted in stunning developments like the electron synchrotron and electron storage ring and the freeelectron laser. This handbook highlights these developments in fifty chapters. The reader is given not only an inside view of exciting science areas but also of design concepts for the most advanced light sources. The theory of synchrotron radiation and of the freeelectron laser, design examples and the technology basis are presented. The handbook presents advanced concepts like seeding and harmonic generation, the booming field of Terahertz radiation sources and upcoming brilliant light sources driven by laser-plasma accelerators.
The applications of the most advanced light sources and the advent of nanobeams and fully coherent x-rays allow experiments from which scientists in the past could not even dream. Examples are the diffraction with nanometer resolution, imaging with a full 3D reconstruction of the object from a diffraction pattern, measuring the disorder in liquids with high spatial and temporal resolution. The 20th century was dedicated to the development and improvement of synchrotron light sources with an ever ongoing increase of brilliance. With ultrahigh brilliance sources, the 21st century will be the century of x-ray lasers and their applications. Thus, we are already close to the dream of condensed matter and biophysics: imaging single (macro)molecules and measuring their dynamics on the femtosecond timescale to produce movies with atomic resolution.