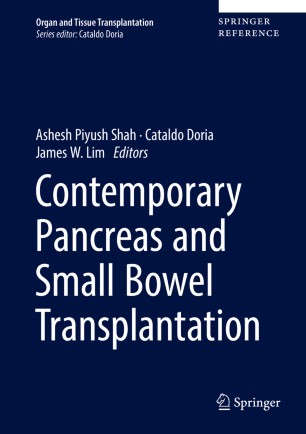 Part of the Organ and Tissue Transplantation book series (OTT)

Dr. Cataldo Doria graduated Magna cum Laude from the University of Perugia, Italy, in 1990, where he was, also, resident in surgery from 1990 to 1995. He completed a research fellowship in small bowel transplantation at the University of Pittsburgh Transplantation Institute and a clinical fellowship in multi-organ transplantation at the Thomas E. Starzl Transplantation Institute of the University of Pittsburgh. Dr. Doria has Ph.D. in surgery biotechnology and transplant immunology and M.B.A. Cataldo Doria, M.D., Ph.D., M.B.A., is the Cancer Center Medical Director at Capital Health in Pennington, NJ. Prior to joining Capital Health, Dr. Doria was Professor of Surgery at Sidney Kimmel Medical College at Thomas Jefferson University in Philadelphia, PA. Dr. Doria is the inaugural Nicoletti Family Professor of Transplant Surgery at Sidney Kimmel Medical College, Thomas Jefferson University Hospital. He is also the Director of the Jefferson Transplant Institute, the Director of the Division of Transplantation, and the SurgicalDirector of the Jefferson Kimmel Cancer Center, Liver Tumor Center, at the same institution. Dr. Doria is the Chairman of the Quality Assurance Performance Improvement Committee of the Jefferson Transplant Institute at Thomas Jefferson University Hospital. He is a multi-organ transplant surgeon who has extensive expertise in cadaveric and living-related liver and kidney transplant, pancreas transplant, small bowel transplant, as well as hepatobiliary and robotic surgery. Prior to Jefferson, Dr. Doria was at the Mediterranean Institute for Transplantation and Advanced Specialized Therapies (ISMETT, UPMC Italy) – a partnership between the University of Pittsburgh Medical Center and the Italian National Government – where he served as Chief of Abdominal Organ Transplant. He also served as Assistant Professor of Surgery at the University of Pittsburgh School of Medicine and at the Thomas E. Starzl Transplantation Institute, Children’s Hospital of Pittsburgh, and the US Department of Veterans Affairs Medical Center of Pittsburgh, PA. His research interest focuses primarily on cancer of the liver, pancreas, and bile duct. Dr. Doria’s biography has been listed in Who’s Who in Medicine and Healthcare, Who’s Who in Finance and Industry, Who’s Who in Science and Engineering, and Who’s Who in America. Dr. Doria, in year 2005, was named Honorary President of the Italian Association for Organ Donation of the Province of Taranto, Italy. In 2008, he was named “Surgeon of the Year” by the Mid-Atlantic Division of the American Liver Foundation. In 2009, he was the recipient of the Career Achievement Award by the International Association “Pugliesi nel Mondo.” In 2010, he was awarded with the seal of the University of Foggia, Italy. In 2012, he was named “Knight of the Italian Republic” by the President of the Italian Republic. In 2016, he was named Chairman, Board of Directors, American Liver Foundation, Mid-Atlantic Division. Doria authored 277 scientific publications. Dr. Doria is a member of numerous professional and scientific societies wherein he has covered several official positions. Most importantly, Aldo has been, for the past 10 years, the leader of one of the most successful transplant institutes in North America and now leads one of the rising stars’ cancer center in the northeast of the United States. Dr. Doria’s plans include making Capital Health the most competitive and innovating cancer center of the East Coast of the United States.

Dr. James W. Lim was born in South Korea but grew up in St. Louis, MO, attending the University of Missouri at Kansas City’s 6-Year Medical Program immediately after high school. From the Midwest, he went to Philadelphia, PA, for his general surgery residency at Albert Einstein Medical Center, where he was recruited to join their fellowship program in Transplant Surgery upon completion of his residency. This clinical experience led to his being accepted at the University of Pittsburgh into their Multi-organ Transplant Fellowship Program (now known as the Thomas E. Starzl Transplant Institute) under the tutelage of Dr. John Fung. Dr. Lim aspired to add to his extensive transplant training by going to the University of Chicago, to obtain greater pediatric liver transplant experience, and, while there, was able to train under the likes of Drs. Richard Thistlethwaite, Jim Piper, E. Steve Woodle, Mike Millis, and David Cronin. This extensive training served him well with his first job at the University of Maryland, where, during his time, they had the second largest pancreastransplant program in the country. In addition, Dr. Lim helped grow the country’s largest laparoscopic donor nephrectomy program while at the University of Maryland. He was recruited by Dr. Jim Piper to become the Director of Pancreas Transplant at Westchester Medical Center and he developed that program to be the largest solitary pancreas program at the time in New York. His successful pancreas transplant experience led to his being recruited to the University of Medicine and Dentistry of New Jersey (UMDNJ) at New Brunswick (now Rutgers University) as the Director of their Pancreas Program as well as the Co-director of the Living Donor Program. During his tenure, he helped the transplant program grow to be the second largest in the state of New Jersey. Dr. Lim’s multi-organ experience allowed him to join his mentor, Francisco Badosa, as the Chief of Kidney and Living Donor Transplant at Lankenau

Medical Center. The expertise with growing a transplant program led to his being recruited to Hackensack University Medical Center (HUMC) as their Chief of Transplant. HUMC was searching for a candidate to lead their program which became inactive and unable to perform transplants due to their difficulties with quality and patient safety. Led by Dr. Lim, extensive improvements to quality, regulations, and, most of all, patient safety were made, and they successfully reactivated their program. Dr. Lim moved with his wife, Carolyn, and their two daughters, and most recently joined the transplant program in Denver at Porter Adventist Hospital and is hoping to continue to make positive improvements to their program as well.