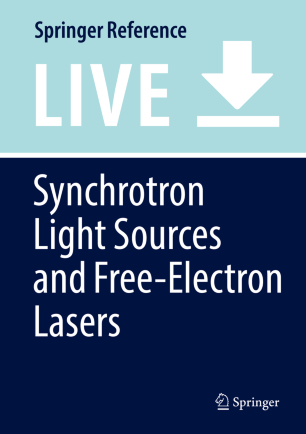 Hardly any other discovery of the nineteenth century did have such an impact on science and technology as Wilhelm Conrad Röntgen’s seminal find of the X-rays. X-ray tubes soon made their way as excellent instruments for numerous applications in medicine, biology, materials science and testing, chemistry and public security. Developing new radiation sources with higher brilliance and much extended spectral range resulted in stunning developments like the electron synchrotron and electron storage ring and the free-electron laser. This handbook highlights these developments in fifty chapters. The reader is given not only an inside view of exciting science areas but also of design concepts for the most advanced light sources. The theory of synchrotron radiation and of the free-electron laser, design examples and the technology basis are presented. The handbook presents advanced concepts like seeding and harmonic generation, the booming field of Terahertz radiation sources and upcoming brilliant light sources driven by laser-plasma accelerators.
The applications of the most advanced light sources and the advent of nanobeams and fully coherent x-rays allow experiments from which scientists in the past could not even dream. Examples are the diffraction with nanometer resolution, imaging with a full 3D reconstruction of the object from a diffraction pattern, measuring the disorder in liquids with high spatial and temporal resolution. The 20th century was dedicated to the development and improvement of synchrotron light sources with an ever ongoing increase of brilliance. With  ultrahigh brilliance sources, the 21th century will be the century of x-ray lasers and their applications. Thus, we are already close to the dream of condensed matter and biophysics: imaging single (macro)molecules and measuring their dynamics on the femtosecond timescale to produce movies with atomic resolution.

Eberhard Jaeschke studied physics at the universities of Erlangen and Princeton. After his PhD in Nuclear Physics, he moved to the Max-Planck-Institut für Kernphysik, Heidelberg, where his interests turned more and more to the physics of accelerators and their development. At Heidelberg University he taught experimental physics, got his habilitation and was promoted to professor (apl). The Heidelberg-TSR, - the first Heavy Ion cooler ring with electron and laser cooling -, which he managed as project leader, was a worldwide recognized success. From Heidelberg Eberhard Jaeschke moved to Berlin, becoming member of the board of directors of the Berliner-Elektronenspeicherring-Gesellschaft für Synchrotronstrahlung BESSY and received a call for a full professorship at the Humboldt Universität. He was project director of the construction of BESSY II, the first German third-generation synchrotron light source. His marvelous team managed to build BESSY II in time and on budget and turned after this success to the design of modern light sources, the Free Electron Lasers (FELs).

Research stays over the years were to Los Alamos, Stony Brook, Tokyo, Chalk River and to the Budker Institute of Nuclear Physics, Novosibirsk.

Eberhard Jaeschke retired from BESSY after eighteen years on the board and is now professor emeritus. In 2010, he was awarded the Officer's Cross of the Order of Merit of the Federal Republic of Germany.

Shaukat Khan studied physics at Heidelberg University and received his doctor’s degree in 1987 with work in nuclear spectroscopy at the Max Planck Institute for Nuclear Physics. While working as a postdoc on a silicon vertex detector for the ARGUS experiment at DESY/Hamburg, he became more and more interested in accelerator physics. Consequently, he joined the BESSY II project in Berlin in 1993 where his research interests included collective beam instabilities and the generation of ultrashort x-ray pulses.

After receiving his lecturer qualification (habilitation) from the Humboldt University of Berlin, he became W2 professor at Hamburg University in 2006 and full professor at TU Dortmund University in 2008. In addition to holding a chair in accelerator physics, he is director at the university-based synchrotron radiation facility DELTA at which his working group develops laser-seeding techniques to produce ultrashort radiation pulses.

Jochen Schneider studied Physics at the University of Hamburg and did his PhD under the guidance of H. Maier-Leibnitz at the Institute Max von Laue-Paul Langevin in Grenoble, France. After working at the Hahn-Meitner Institute and the Technical University in Berlin, in December 1989 he moved to the Deutsches Elektronen-Synchrotron DESY in Hamburg, Germany. His main interest is in structural phase transitions and electronic properties of solids, as well as synchrotron radiation instrumentation. He developed γ-ray diffractometry and pioneered the appli

cation of high energy synchrotron radiation in condensed matter research. In 1993 he became head of the synchrotron radiation laboratory HASYLAB at DESY, from 2000 to 2007 he was Photon Science Research Director. In his tenure he initiated DESY’s 3rd generation synchrotron radiation facility PETRA III, the free-electron lasers FLASH and European XFEL, and the Center for Free-Electron Laser Science CFEL. After 2 years at SLAC National Accelerator Laboratory at Stanford in charge of the experimental facilities division of LCLS, the Linac Coherent Light Source, he is now a Fellow of CFEL and scientific advisor to the DESY Directorate.In 1981 Jochen Schneider received the Viktor-Moritz-Goldschmidt-Award of the German Mineralogical Society, in 2001 the European Crystallography Prize, and in 2008 the Officer's Cross of the Order of Merit of the Federal Republic of Germany.

Jerome Hastings studied Applied Physics at Cornell University and did his PhD under the guidance of B. W. Batterman. After working at the National Synchrotron Light Source for nearly 25 years, in October 2001 he moved to the SLAC National Accelerator Laboratory in Menlo Park, CA, USA. His main interest is in methods and instrumentation for accelerator based light sources. He developed the applications of ultra-high energy resolution methods applied to synchrotron based Mössbauer Spectroscopy and inelastic X-ray ay scattering. In addition he lead the ultra-short pulse spontaneous radiation facility “Sub-Picosecond Pulse Source” at the SLAC National Accelerator Laboratory from 2001 to 2006. In his tenure at the National Synchrotron Light Source the NSLS R&D effort developed many of the methods and instruments in common use today at 3rd generation synchrotron light sources.