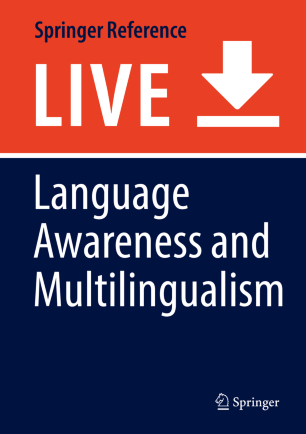 Part of the Encyclopedia of Language and Education book series (ELE)

In this third, fully revised edition, the 10 volume Encyclopedia of Language and Education offers the newest developments, including an entirely new volume of research and scholarly content, essential to the field of language teaching and learning in the age of globalization. In the selection of topics and contributors, the Encyclopedia reflects the depth of disciplinary knowledge, breadth of interdisciplinary perspective, and diversity of socio-geographic experience in the language and education field. Throughout, there is an inclusion of contributions from non-English speaking and non-western parts of the world, providing truly global coverage. Furthermore, the authors have sought to integrate these voices fully into the whole, rather than as special cases or international perspectives in separate sections. The Encyclopedia is a necessary reference set for every university and college library in the world that serves a faculty or school of education, as well as being highly relevant to the fields of applied and socio-linguistics. The publication of this work charts the further deepening and broadening of the field of language and education since the publication of the first edition of the Encyclopedia in 1997 and the second edition in 2008.

Prior to taking up his position at The University of Auckland, Professor Stephen May was Foundation Professor and Chair of Language and Literacy Education in the School of Education, University of Waikato (2001-2009). In the 1st semester of 2008, he was also a New Zealand Fulbright Senior Scholar, based at Arizona State University, Teachers College, Columbia University and City University New York, where he undertook a comparative ethnographic study of successful school-based bilingual education programs. In 2001, he was a visiting scholar at the Ontario Institute for Studies in Education (OISE), University of Toronto. Stephen began his professional career in the 1980s as a secondary teacher of English and ESL in New Zealand and has subsequently taught in universities in New Zealand, Britain, USA and Canada. From 1993-2001 he taught in the Sociology Department, University of Bristol, UK, where he remains affiliated as a Honorary Research Fellow.