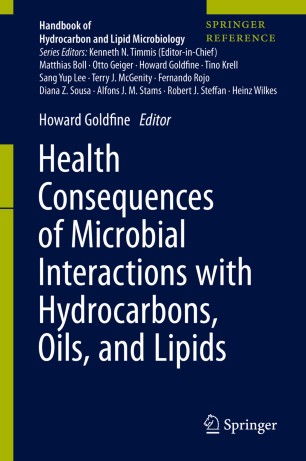 Health Consequences of Microbial Interactions with Hydrocarbons, Oils, and Lipids

This book is a compilation of the most relevant molecular mechanisms and cellular processes that are involved in the infection processes in relation to lipid metabolism. The authors are international experts in the field of infection biology. Readers will understand infection metabolism and the contribution of lipids and lipid-protein interaction to lipids.
Microbial lipids play an important role in almost all cellular phenomena. Microbial infections also contain an important virulence component in microbial lipids. The secretion of lipid vesicles that contain virulence factors, the assembly of lipid membrane microdomains harboring signal transduction pathways relate to infection process and the number of lipid-protein interactions that are necessary for the internalization of pathogens to host cells are some examples of the importance of lipids and lipid metabolism in the development of infections.

Dr. Howard Goldfine received his B.S. degree from the City College of the City University of New York and his Ph.D. from the University of Chicago. After postdoctoral fellowships in the laboratories of Earl Stadtman at the NIH and Konrad Bloch at Harvard University, he joined the faculty of the Department of Microbiology and Immunology at Harvard Medical School. He moved to the University of Pennsylvania as an Associate Professor of Microbiology in the School of Medicine and subsequently was promoted to Full Professor. He has held a Macy Foundation Faculty Scholar Award, a Fogarty Senior International Fellowship, and a fellowship from the Japan Society for the Promotion of Science and has been a Visiting Professor at the University of Basel and University College London. He is President of the newly organized International Plasmalogen Society. In recognition of his research accomplishments he was elected a Fellow of the American Academy of Microbiology in 1988 and of the American Association for the Advancement of Science in 1998.

Dr. Goldfine has had a notable career in biochemistry and microbiology over the past half century. During this time he has made important contributions to our understanding of bacterial fatty acid and phospholipid biosynthesis, the assembly of the outer membranes of Gramnegative bacteria, the regulation of biophysical properties of bacterial membranes, and the structures, biosynthesis, and functions of bacterial ether lipids. In a second major phase of his research career his laboratory played a large role in elucidating the roles of phospholipases in bacterial pathogenesis with a focus on Listeria monocytogenes.