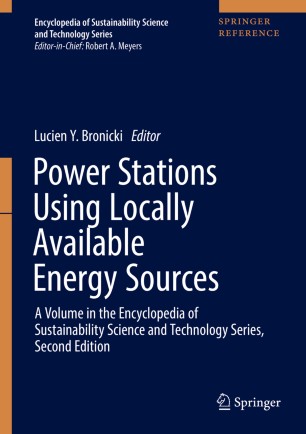 A Volume in the Encyclopedia of Sustainability Science and Technology Series, Second Edition

This volume covers the utilization of geothermal and related energy resources that exploit variations in temperature, chemistry, etc. and require different plant designs and technologies for each location. Extending beyond power plants using geothermal and ocean energy, coverage includes hot dry rock systems, geothermal conditioning, solar ponds, osmotic power, dry air, and potential future deep sea hydrothermal sources. Some technologies have reached the prototype stage, some not even that, but where much work has been invested, it is important to provide a complete picture if only to prevent others from following a dead-end path. For geothermal power plants, the greatest challenge remains the geothermal resource itself. Power conversion is the least uncertain part of a geothermal project, as it consists of a straightforward engineering design with work executed by experienced manufacturers, engineering firms, and contractors. The issues associated with integrating large amounts of ocean energy into the overall supply are also explored.

Collecting more than 20 new articles and updated entries, all peer reviewed, this volume in the Encyclopedia of Sustainability Science and Technology, Second Edition, provides an authoritative introduction from exploration techniques to conversion systems for a wide range of locally available energy sources. This comprehensive reference is suitable for those just entering these fields, but also offers new insights for advanced researchers, industry experts, and decision makers.

Until recently, Lucien Bronicki was the Chairman and Chief Technology Officer of Ormat Technologies Inc. In 1964 he founded, Ormat in Israel and in 1972 he established, with his wife Dita, Ormat in the US.

Before establishing Ormat he worked in the Nuclear Research Center in Saclay (France) on design of a bubble chamber for elementary particle research at CERN, he then joined the National Physical Laboratory of Israel, to develop a solar energy powered turbine.

He holds a B.Sc. in Mechanical Engineering, a M.Sc. in Physics from the University of Paris and a post graduate degree in Nuclear Engineering from CNAM in Paris. He received the Geothermal Research Council Pioneers Award and PhD Honoris Causa from the Weizmann Institute of Science and the Technion Institute of Technology.

Bronicki has authored or co-authored many professional articles and more than 100 patents on thermodynamic devices, turbines and controls.

He was a member of the Studies Committee “Energy for Tomorrows World Commission” of the World Energy Council and is a member of the Executive Council of the Weizmann Institute of Science. He is also a member of the American Society of Mechanical Engineers, of IEEE, of the International Solar Energy Society, and the Geothermal Research Council.