Encyclopedia of Law and Economics 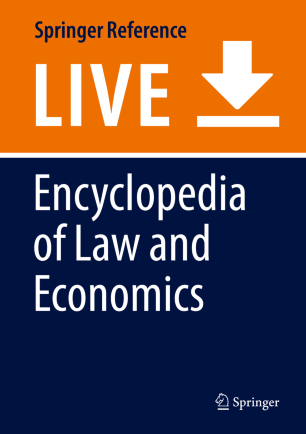 Law and Economics deals with the economic analysis of legal relations, legal provisions, laws and regulations and is a research field which has a long tradition in economics. It was lost after the expulsion of some of the leading economists from Germany during 1933 to 1938, but then revived in Chicago.  Both the subject of Law of Economics and the need for a concise Encyclopedia is particularly relevant in Europe today.  Currently in the European Union there are several different legal cultures: the Anglo-Saxon legal framework, the German legal framework, which for example also includes Greece, and the Roman legal family—three jurisdictions which have to be covered with one and the same theory. In the EU, the task of the European Commission to interact with the various European jurisdictions means different legal cultures collaborating and some degree of harmonization is necessary. The result is an immediate need, if only for the science, to show how a given problem is solved in each legal tradition and jurisdiction. This Encyclopedia provides both a common language and precise definitions in the field, which will be useful in the future to avoid misunderstandings during harmonization of EU Law