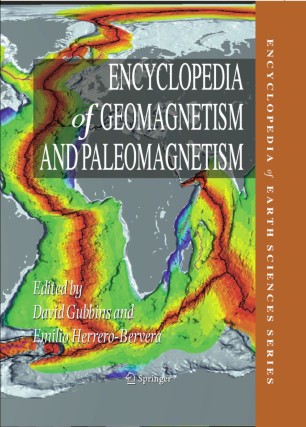 Understanding the process underlying the origin of Earth magnetic field is one of the greatest challenges left to classical Physics. Geomagnetism, being the oldest Earth science, studies the Earth’s magnetic field in its broadest sense.

The magnetic record left in rocks is studied in Paleomagnetism. Both fields have applications, pure and applied: in navigation, in the search for minerals and hydrocarbons, in dating rock sequences, and in unraveling past geologic movements such as plate motions they have contributed to a better understanding of the Earth.

Consisting of more than 300 articles written by ca 200 leading experts, this authoritative reference encompasses the entire fields of Geomagnetism and Paleomagnetism in a single volume. It describes in fine detail at an assessable level the state of the current knowledge and provides an up-to-date synthesis of the most basic concepts. As such, it will be an indispensable working tool not only for geophysicists and geophysics students but also for geologists, physicists, atmospheric and environmental scientists, and engineers.

David Gubbins is Research Professor of Earth Sciences in the School of Earth & Environment, University of Leeds, UK. He did his PhD on geomagnetic dynamos in Cambridge, supervised by Sir Edward Bullard (q.v.) and has worked in the USA and in Cambridge before moving to Leeds in 1989. His work has included dynamo theory and its connection with the Earth's thermal history, modeling the Earth's magnetic field from historical measurements, and recently the interpretation of paleomagnetic data.  He is a Fellow of the Royal Society and has been awarded the Gold Medal of the Royal Astronomical Society and the John Adam Fleming (q.v.) Medal of the American Geophysical Union for original research and leadership in geomagnetism.

Emilio Herrero-Bervera is Research Professor of Geophysics at the School of Ocean Earth Science and Technology (SOEST) within the Hawaii Institute of Geophysics and Planetology (HIGP) of the University of Hawaii at Manoa, where he is the head of the Paleomagnetics and Petrofabrics Laboratory. During his career he has published over 90 papers in professional journals including Nature, JGR, EPSL, and JVGR. He has worked in such diverse fields as volcanology, sedimentology, and plate tectonics and has done fieldwork on 5 continents.