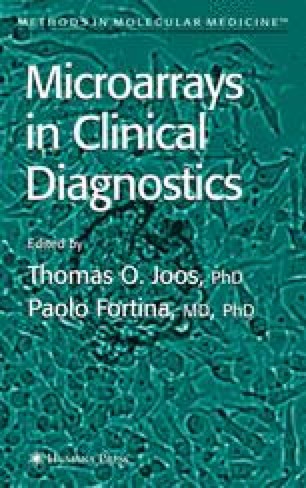 We have developed a sensitive method for the detection of specific genes simultaneously. First, DNA was amplified by a novel asymmetric multiplex PCR with universal primer(s). Second, the 6-carboxytetramethylrhodamine (TAMRA)-labeled PCR products were hybridized specifically with oligonucleotide microarrays. Finally, matched duplexes were detected by using a laser-induced fluorescence scanner. The usefulness of this method was illustrated by analyzing severe acute respiratory syndrome (SARS) coronavirus RNA. The detection limit was 100 copies/µL. The results of the asymmetric multiplex nested reverse transcription-PCR were in agreement with the results of the microarray hybridization; no hybridization signal was lost as happened with applicons from symmetric amplifications. This reliable method can be used to the identification of other microorganisms, screening of genetic diseases, and other applications.

Multiplex Polymerase chain reaction (PCR) was designed to amplify multiple target sequences using more than one pair of primers in the reaction. It has the potential to save a considerable amount of time and effort without compromising test utility and additional instruments.

Since its first report in 1988 (1), multiplex PCR has become a rapid and convenient screening procedure in both clinical and research laboratories. It has been successfully applied to gene deletion analysis (2), mutation and polymorphism analysis (3), mRNA quantitative analysis (4), RNA detection (5,6) and genome sequencing (7). For infectious disease diagnosis, multiplex PCR has been a valuable tool for the identification of viruses (8,9), bacteria (10,11), parasites (12), and bacterial drug-resistance genes (13,14).

The development of an efficient multiplex PCR protocol usually requires careful design of primers and many rounds of optimization. The common problems encountered in multiplex PCR are spurious amplification products, uneven or no amplification of some target sequences, and difficulties in reproducing the results. A successful multiplex PCR assay needs the following parameters to be set properly: relative concentration of the primers, concentration of the PCR buffer, balance between the magnesium chloride and dNTP concentrations, cycling temperatures, and amount of template and DNA polymerase. An optimal combination of annealing temperature and buffer condition is essential to ensure high specificity of multiplex PCR. Magnesium chloride concentration needs to be proportional to the amount of dNTPs. Adjusting primer concentration for each target sequence is also essential (15,16). Henegariu et al. (17) presented a step-by-step protocol for multiplex PCR, after study, of some of these factors.

Preferential amplification of one target sequence over another (bias in template-toproduct ratios) is a known phenomenon in multiplex PCR; it mainly occurs because multiplex PCR has a limited supply of enzymes and nucleotides. All primer pairs compete for the same pool of supplies, but their amplification efficiencies are different. Amplification biases that were strongly dependent on the primers and, to a lesser degree, the templates, have been described (17).

Asymmetric PCR is often used to generate single-stranded DNA (ssDNA). The method is especially useful for hybridizing PCR product against probes such as the ones used in microarray hybridizations. Oligonucleotide microarray has provided a powerful platform for nucleic acid analysis (19, 20, 21, 22). Hybridization of labeled nucleic acid targets with microarrays of surfaceimmobilized oligonucleotide probes was the central event in the detection of nucleic acids on microarrays (23). Before hybridization, the ssDNA targets were prepared by using denaturation of the PCR products or by other methods. Only one of the two DNA strands was available for hybridization with the immobilized probes; the other one competed with the probes for the target and therefore was regarded as the interfering strand (24). What was worse was that the annealing effect of the two complementary strands was dominant, because of their faster kinetics and higher thermodynamic stabilities. Kawai et al. (25) reported that the sensitivity with ssDNA targets was fivefold higher than that with boiled double-stranded DNA (dsDNA) targets, when they were hybridized with oligonucleotide probes. Thus preparation of ssDNA targets was preferred for high efficient hybridization on oligonucleotide microarrays.

In the conventional asymmetric PCR for ssDNA preparation, the two primers are present in different molar amounts. When the primer in the limited amount is exhausted, an excess of ssDNA will be produced in each cycle (26). Erdogan et al. (27) have successfully applied the single-stranded targets produced by asymmetric PCR to a single-nucleotide polymorphism detection system. However, they considered this method to have the disadvantage that the products appeared as a serious smear of bands in agarose gel (27). To improve the ssDNA production efficiency of this method, Kaltenboeck et al. (28) designed a two-step asymmetric PCR, in which a symmetric PCR for dsDNA was first preformed under optimal conditions, and then a single primer was used to generate ssDNA targets by using the purified double-stranded PCR products as template. Although it was time consuming, this two-step method was still applied to ssDNA target preparation (28, 29, 30).

However, the conditions are extraordinarily involved in ordinary multiplex PCR, if the asymmetric PCR is performed in a parallel fashion in the same reaction. There are few references for asymmetric multiplex amplification. This issue may be simplified by modifying the universal primer-mediated multiplex PCR using disproportional universal primers ( Fig. 1 B).

Severe acute respiratory syndrome (SARS) is a new infectious disease of humans, first recognized in late February 2003 in Hanoi, Vietnam. The disease spread rapidly, with cases reported from 29 countries on five continents over 4 months (31, 32, 33, 34, 35, 36, 37, 38). By July 3, 2003, this epidemic had resulted in 8439 reported cases globally, of which 812 were fatal (http://www.who.int/csr/sars/country/2003_07_03). Rapid and sensitive laboratory confirmation of SARS coronavirus (CoV) infection was important for managing patient care and for preventing nosocomial transmission. Although serological testing was reliable as a retrospective diagnostic method, diagnosis of the infection in the early phase of the illness was important for patient care.

In this study, SARS CoV RNA was amplified by using multiplex nested reverse transcription-PCR (RT-PCR), followed by microarray hybridization. During the multiplex PCR, several different ratios of the universal primers were used, and the results were compared.

The methods described below outline (1) the construction of the microarray; (2) the quantification and dilution of SARS CoV RNA; (3) the multiplex nested RT-PCR amplification, symmetric and asymmetric; (4) the agarose gel electrophoresis; (5) the microarray hybridization; and (6) the fluorescence scanning.

An overlapping of 70-nucleotide (nt) segment with the T m value set at 80°C and with the least free energy in the hairpin structure and dimer was designed as the probe following the rule from http://www.westburg.nl/download/arrayposter.pdf to minimize cross-hybridization. To increase the immobilization efficiency of the probes, 10 thymidines were added to the 5′ end of each probe.

After an initial screening test, four oligonucleotides were chosen as the probes for identifying SARS CoV (probes 11, 24, 40, and 44). Additionally, several probes were also included for control purposes. The quality control (QC) probe was used to confirm the efficiency of the attachment chemistry on the surface of the substrate. For all tests, this probe always generates a strong and consistent fluorescence signal. The internal control (IC) probe, which hybridizes to the amplicons of its inner primers, was designed to guarantee that the entire nested RT-PCR process operates as expected. The external control (EC) probe was used to monitor the efficiency of the hybridization process. The negative control (NC) probe was an oligonucleotide whose sequence was irrelevent to any amplicons of the multiplex nested RT-PCR. The blank control (BC) probe was DMSO spotted on the substrate, to ensure that no signal is detected on these spots, indicating no carryover of the previously spotted samples. The sequence information of the probes is listed in Table 1 .
Table 1

b The position of the inner primers does not include the poly T in the 5′ ends.

The probes were suspended in 50% DMSO at a concentration of 10 µM and printed on glass slides modified with amino groups (AminoSlide). Four subarrays of the 6 × 6 probes were printed on each slide. The design of the microarray is illustrated in Fig. 2 .

3.2.1 Quantification of the SARS CoV RNA

c The position of the inner primers does not include the universal sequences usf and usr.

The first-round reaction of the nested RT-PCR is one-step RT-PCR. The secondround reaction is PCR using the products from the first round as the templates.

The electrophoretic results of the multiplex nested RT-PCR are shown in Fig. 4 (see Note 5). No band was seen in all blank controls (lanes Bl). Aband of the predicted size (275 bp) was observed in all negative controls (lanes N). For other samples, it appeared that the asymmetric amplification was more efficient than the symmetric amplification (D). When the concentration of SARS viral RNA was 100 copies/µL, the bands for the inner controls (275 bp) became invisible. The reason was that for the inner control template, the human total RNA spiked into the viral RNA was too little (0.167 ng/µL) to be amplified effectively. Similarly, only part of the bands for SARS CoV amplification was visible when the concentration of SARS viral RNA was 100 copies/µL. However, when the higher concentrations of RNA were used as templates, the bands of three parallel multiplex nested RTPCR reactions were similar to each other, regardless of symmetric or asymmetric amplifications.