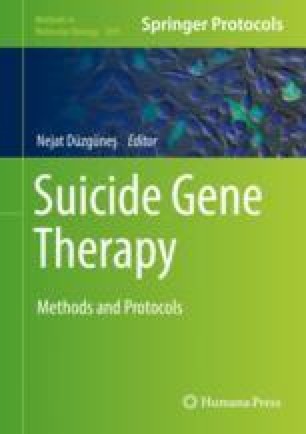 Suicide gene therapy is based on the introduction of a foreign gene into tumor cells to sensitize cells to treatment, to convert a nontoxic compound into a lethal drug, or to produce a cytotoxic effect. We have constructed a suicide gene therapy vector that contains resveratrol-responsive CArG elements from the Egr-1 promoter and the GADD45α open reading frame. CArG elements are utilized as a “molecular switch” to drive the expression of GADD45α. When transfected into lung cancer cells, the vector is able to express GADD45α upon resveratrol treatment, and subsequently leads to cell cycle arrest at the G2/M transition. In this chapter, we describe a detailed protocol for vector construction, transfection, cell viability assay, and cell cycle analysis.

Reinstitution of a tumor suppressor gene by gene transfer technology has been shown to result in cancer cell death, tumor regression, and angiogenesis inhibition [1]. Growth arrest and DNA damage-inducible 45 alpha (GADD45α) is a ubiquitously expressed protein involved in the regulation of DNA repair, cell cycle progression, senescence, and stress-induced signaling transduction, and has been identified as a tumor suppressor [2]. Deficiency in GADD45α is associated with the initiation and development of malignancy and is regarded as a “second genetic hit” in tumorigenesis [3, 4]. Importantly, upregulation of GADD45α is necessary for many anticancer agents to exhibit their proapoptotic and anti-growth effects in cancer cells [5, 6]. Therefore, we chose GADD45α as the suicide gene and hypothesized that overexpression of GADD45α leads to tumor cell growth arrest and apoptosis.

CArG elements are the serum response elements (SREs) or 10-nucleotide motifs of the consensus sequence CC(A/T)6GG in the Egr-1 promoter that are responsive to ROS generated by radiation and chemotherapy [7]. Both deletion construct containing the CArG elements in Egr-1 5′ distal enhancer region and synthetic promotes consisting of isolated CArG motifs are able to work as a “molecular switch” in the presence of radiation or chemotherapeutic agents to initiate the expression of cDNA engineered in the therapy vector [8, 9]. Resveratrol has been implicated to induce Egr-1 promoter activity and to exert antitumor effects via Egr-1 activation [10, 11]. Altogether, we assumed that resveratrol is sufficient to trigger CArG-based promoter to drive the transcription of cloned cDNA.

The suicide gene therapy vector we designed relies on the use of CArG elements as an inducible promoter to transcriptionally activate the expression of tumor suppressor gene GADD45α. When combined with resveratrol, the vector increases cellular GADD45α protein level and subsequently results in cell growth inhibition and cell cycle arrest at G2/M transition.

2.1 Materials for Cell Culture and Transfection

3.1 Growth and Maintenance of Cells

A549, a human lung adenocarcinoma epithelial cell line, was passaged when confluency was reached, usually every 2–4 days.

3.3 Cloning of Resveratrol Responsive-Promoter from PCR Product (For Natural Promoter) or Oligonucleotides (For Synthetic Promoter) into pT.luc/pTarget