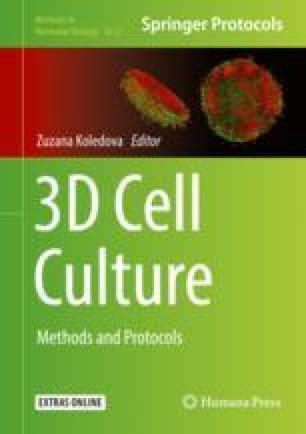 Metastasis is the main cause of cancer patient mortality. Local tumor invasion is a key step in metastatic dissemination whereby cancer cells dislodge from primary tumors, migrate through the peritumoral stroma and reach the circulation. This is a highly dynamic process occurring in three dimensions that involves interactions between tumor, stromal cells, and the extracellular matrix. Here we describe the organotypic culture system and its utility to study breast cancer cell invasion induced by cancer-associated fibroblasts. This is a three-dimensional model that reproduces the biochemical and physiological properties of real tissue and allows for investigating the molecular and cellular mechanisms involving tumor and its microenvironment, and their contribution to cancer cell invasion. This system provides a robust, accurate, and reproducible method for measuring cancer cell invasion and represents a valuable tool to improve the mechanistic understanding of the initial steps in metastasis.

Metastatic dissemination is the major clinical complication in most types of cancer and the cause of 90% of cancer-related deaths [1]. Invasion of cancer cells into the peritumoral stroma is a key step in metastasis [2, 3]. Thus, understanding the mechanisms regulating the invasive abilities of cancer cells is imperative to inform the development of therapeutic modalities to minimize cancer dissemination and improve patient survival [4]. Local cancer cell invasion is a multifunctional and dynamic process occurring in three dimensions that is actively modulated by the peritumoral stroma [5, 6, 7]. Cancer-associated fibroblasts (CAFs) are particularly relevant as they can produce soluble factors that promote cancer cell invasion [8]. In addition, CAF-dependent matrix remodeling via focalized proteolysis activity [9] or actomyosin-dependent force generation [10, 11] can lead to the formation of tracks through the extracellular matrix (ECM ) that enable subsequent cancer cell invasion. Accordingly, three-dimensional (3D) models of cancer cell invasion that incorporate stromal components such as fibroblasts and physiologically relevant ECMs recapitulate more closely the in vivo situation. These models provide a platform for investigating the complex interactions between tumor and its microenvironment that are more likely to lead to novel insights of clinical relevance.

Here, we describe a 3D organotypic invasion assay adapted for the robust and accurate assessment of breast cancer cell invasion induced by CAFs [11, 12, 13]. This approach was originally developed as a 3D coculture model by Fusenig and colleagues [14], and further developed by other groups to study squamous cell carcinoma invasion [10, 15]. Briefly, CAFs are embedded in a dense gel composed of fibrillar collagen I and basement membrane matrix (termed Matrigel®, Cultrex®, or Engelbroth-Holm-Swarm matrix), which contains laminins, collagen IV, proteoglycans, and a broad spectrum of growth factors (see Fig. 1). A thin layer of gel is used to cover the breast cancer cells seeded on the surface of the CAF-containing gel to mimic the physiological condition of breast tissue. Gels are subsequently laid on a grid and maintained partially immersed in cell medium. Organotypic gels are then fixed and processed by standard histopathological procedures followed by quantitative and qualitative analysis of breast cancer cell invasion using standard image processing and analysis software.

This protocol is an adapted version of a previously described method for SCC12 carcinoma cells [10] (see Fig. 1 for a schematic representation). We have optimized the organotypic invasion assay for murine and human breast cancer cells (410.4/4T1 and MDA-MB-231) in combination with murine or human fibroblasts, respectively (see Note 8 ). On a general basis, cancer cells are not invasive in this setting and rely on CAF activities to invade. It is recommended to test the behavior of alternative cancer cell types in the assay by plating them on top of a fibroblast-free gel matrix. Heterogeneity is also observed in CAFs in terms of their ability to contract and remodel gel matrices. The amount of fibroblasts and cancer cells to be used, as well as the length of the protocol, need to be optimized if alternative models are used (see Note 9 ).

All components of the gel mix must be kept on ice. Here we describe the protocol for 1 mL gel mix containing fibroblasts or without fibroblasts. This is the volume required for one sample in one well of a 24-well plate. The total volume of gel mix needs to be scaled up according to sample size. Generally, it is recommended to prepare gel in excess to avoid pipetting errors due to the viscous nature of the components.

Depending on the number and matrix-remodeling ability of the fibroblasts, some of the gels may have already contracted at this point. The plate can be scanned to document this, as gel contraction can serve as an additional read-out of CAF function (Fig. 2d).

Given the softness of the gels, direct contact with the metal can damage the gels. Before placing the gels on the bridges, nylon filters have to be prepared and placed in-between the gels and the metal grid.

3.4 Lifting the Gel and Covering the Cancer Cells

The gels are placed on the metal bridges and medium is fed from underneath to impose a direction of invasion. The breast cancer cell layer is covered with a thin layer of gel for improved simulation of in vivo conditions (see Note 20 ).

CAFs have been shown to form tracks in the ECM , which has been associated with increased invasiveness of cancer cells [10]. However, CAFs can also produce soluble factors that can promote cancer cell invasion [8]. The basic organotypic invasion assay described above does not allow discriminating between these two abilities.

In order to specifically study the capacity of CAFs to form tracks in the gel that allow subsequent cancer cell invasion, as well as the potential of cancer cells to invade a gel previously remodeled by CAFs , a variation of the basic organotypic culture assay can be performed: the “killing” assay . Fibroblasts are seeded as described earlier and are allowed to remodel the gel matrix for 5 days before they are removed. When cancer cells are seeded on top of the gel, they will invade into the tracks formed by the fibroblasts (Fig. 3c). This modified version also allows for discriminating the selective effect of chemical compounds on fibroblasts/cancer cells as both compartments are never cultured together.

R.R. and F.C. are funded by The Institute of Cancer Research (UK). F.C. is also supported by Worldwide Cancer Research (Grant 15-0273). We thank Dr. Erik Sahai and Steven Hooper for contributing to develop the technique described here. We also thank lab members for help and advice, and for critically reading the manuscript.

Open Access This chapter is licensed under the terms of the Creative Commons Attribution 4.0 International License (http://creativecommons.org/licenses/by/4.0/), which permits use, sharing, adaptation, distribution and reproduction in any medium or format, as long as you give appropriate credit to the original author(s) and the source, provide a link to the Creative Commons license and indicate if changes were made.The images or other third party material in this chapter are included in the chapter’s Creative Commons license, unless indicated otherwise in a credit line to the material. If material is not included in the chapter’s Creative Commons license and your intended use is not permitted by statutory regulation or exceeds the permitted use, you will need to obtain permission directly from the copyright holder.