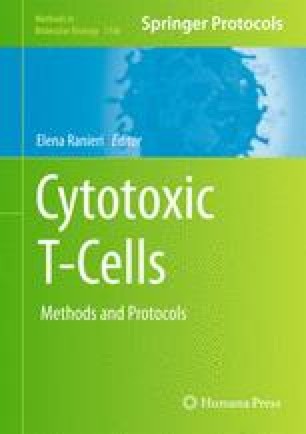 During the course of an immune response in kidney transplantation, distinct functional subsets of effector and regulatory T cells are generated in the lymphoid compartment following the differentiation of T cells under the influence of specific cytokines. In addition to effector cells inflammation in a CXCR3-independent manner, a CXCR3-chemokine dependent pathway exacerbates these inflammatory processes in this scenario. Indeed, the upregulation of CXCR3 ligands mediates the mobilization of effector CTLs to the peripheral site of infection. The immediate upregulation of CXCR3 on CD4+ CTLs and CD8+ CTL following DC activation makes this an interesting proposal, as activated T cells are recruited into lymphoid and noncanonical lymphoid compartments. The importance of tissue in vivo characterization is emerged as a central topic in kidney transplantation.

In the following method we describe a protocol based on immunohistochemistry (IHC) and immunofluorescence/confocal microscopy along with strategies of overall signals quantification and positive cells quantification (Aperio, Adobe Photoshop). Through an in vivo approach, we focus on those changes that result relevant during immune response in transplantation. Although less quantitative than other methods, the information gained from IHC combined with microscopy provides a “picture” that can help to address our subsequent experiments. The advantage of this protocol consists in the possibility to evidence CTLs tissue accumulation and to investigate the different areas (tubular, glomerular, and interstitial) of the graft directly affected by CTLs-specific activity.

Pressure Cooker Grade Alcohol Series Nail Varnish Lymphoid Compartment Antigen Retrieval Buffer
These keywords were added by machine and not by the authors. This process is experimental and the keywords may be updated as the learning algorithm improves.
This is a preview of subscription content, log in to check access.