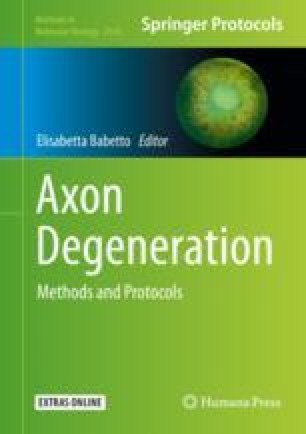 Axonal transport, which is the process mediating the active shuttling of a variety cargoes from one end of an axon to the other, is essential for the development, function, and survival of neurons. Impairments in this dynamic process are linked to diverse nervous system diseases and advanced ageing. It is thus essential that we quantitatively study the kinetics of axonal transport to gain an improved understanding of neuropathology as well as the molecular and cellular mechanisms regulating cargo trafficking. One of the best ways to achieve this goal is by imaging individual, fluorescent cargoes in live systems and analyzing the kinetic properties of their progression along the axon. We have therefore developed an intravital technique to visualize different organelles, such as signaling endosomes and mitochondria, being actively transported in the axons of both motor and sensory neurons in live, anesthetized rodents. In this chapter, we provide step-by-step instructions on how to deliver specific organelle-targeting, fluorescent probes using several routes of administration to image individual cargoes being bidirectionally transported along axons within the exposed sciatic nerve. This method can provide detailed, physiologically relevant information on axonal transport, and is thus poised to elucidate mechanisms regulating this process in both health and disease.

Axonal transport is the indispensable process whereby molecular motor proteins actively traverse the microtubule network of neurons to deliver a variety of different cargoes from one end of an axon to the other. Kinesin family proteins drive anterograde transport from the cell body to the axon tip, whereas retrograde transport is contingent upon cytoplasmic dynein [1]. Mutations in several genes essential to this bidirectional trafficking are known to cause neurodevelopmental and neurodegenerative conditions [2, 3], while its disturbance is thought to underlie, or at least contribute to, a broad variety of neurological disorders, including amyotrophic lateral sclerosis (ALS), Alzheimer’s disease, and Charcot–Marie–Tooth disease [4]. It is therefore essential that this dynamic process is studied in relevant models in order to fully determine the consequences of impaired axonal transport on neuronal dysfunction and disease.

Real-time tracking of individual cargoes in live axons has long been reported in various primary neuronal cultures and ex vivo tissue preparations; however, there is evidence to indicate that these experimental environments do not always fully replicate what is observed in intact neurons in vivo [5, 6, 7, 8, 9]. This may have a plethora of causes, for instance perturbed physical and chemical interactions with neighboring cells [10], altered activity [11], and insufficient maturation [12], which can only be convincingly overcome by studying transport in vivo. Several methods have been developed to study axonal transport en masse in live rodents [13, 14]; however, these noninvasive techniques have limited temporal and spatial resolution and can be impacted by neuronal death. Although caveats apply, intravital imaging of axonal transport of individual cargoes is likely to provide more physiologically relevant insights into the process, while permitting detailed, real-time dissection of cargo dynamics [15].

We have previously published a method to assess in vivo axonal transport of signaling endosomes in peripheral nerve axons of the sciatic nerve in live, anesthetized rodents [6]. Neurotrophin-containing signaling endosomes are visualized by intramuscular injection of one of two fluorescently labeled probes: an atoxic binding fragment of tetanus neurotoxin (HCT) or an antibody against the extracellular domain of p75 neurotrophin receptor (p75NTR). These probes are internalized at the neuromuscular junction and afferent nerve endings before being retrogradely transported within signaling endosomes toward the cell body of motor and sensory neurons of the sciatic nerve [16]. We have used this method to show that mutant SOD1G93A and TDP-43M337V mice modelling ALS display early deficits in signaling endosome transport in vivo [17, 18], which can be rescued in SOD1G93A mice by p38 MAPK [19] or IGF1R inhibition [20]. Indicating that neurodegeneration is not always linked to disturbances in transport, we have shown that endosome trafficking remains unaffected in FusΔ14/+ ALS mice, spinal and bulbar muscular atrophy mice, and aged wild-type animals [18, 21, 22].

This chapter provides an updated and improved, step-by-step description of the technique to image bidirectional transport of multiple different cargoes in rodent sciatic nerves in vivo. We focus on mice throughout, but the protocol can be adapted for use with rats. We begin by detailing the injection of fluorescent probes into different muscles of the lower leg, followed by exposure of the sciatic nerve for imaging of signaling endosomes. We also outline an extension to the method that permits the visualization of additional cargo types (e.g., mitochondria) through injection of lipophilic dyes directly into the sciatic nerve [23], obviating the requirement for genetically encoded, fluorescent reporter strains (e.g., “MitoMice” [24]). This permits the simultaneous labeling of different cargoes with distinct fluorophores, which will be particularly useful for developing a broader understanding of transport, as the trafficking of different cargoes is differentially regulated [25]. The method reported here will not only aid the assessment of axonal transport in rodent models of neurological disease, it can be used to determine the impact of aging and different drug treatments (e.g., chemotherapeutic molecules) on cargo trafficking, as well as improving our understanding of the basic mechanisms regulating the process.

2.4 In Vivo Imaging of Axonal Transport

5 μg of fluorescently labeled HCT or 1 μg of fluorescently labeled anti-p75NTR is coinjected with 25 ng of recombinant BDNF per muscle in a volume of 1–2 μl of PBS depending on the muscle (see Note 1). HCT and anti-p75NTR target overlapping, but distinct, populations of neurons and can be used to answer different experimental questions (see Note 2). For simplicity and because we use it routinely, we will focus for the remainder of this protocol on using HCT for in vivo labeling of signaling endosomes.

3.1.2 Fluorescent Probe Injection into the Gastrocnemius and Tibialis Anterior Muscles

All mouse handling and experiments must be performed in accordance with local ethical guidelines. The work involving animals presented in this chapter was conducted under license from the UK Home Office in accordance with the Animals (Scientific Procedures) Act (1986), and approved by the University College London (UCL)—Institute of Neurology Ethics Committee.

3.4 In Vivo Imaging of Axonal Transport

Strive to image a minimum of ten trackable cargoes in at least three different axons per animal within an imaging time frame (i.e., from first attempting to visualize the sciatic nerve) of 1 h before culling. We have confirmed that signaling endosome dynamics do not change during this extended imaging period. We perform this protocol as a terminal procedure, but there is scope for recovery and reimaging for longitudinal studies [30], for example, through addition of an imaging window.

Complementing an array of intravital techniques developed to assess in vivo axonal transport [15], we provide an in-depth, stepwise protocol to image bidirectional axonal transport of multiple cargo types within motor and sensory neurons of the sciatic nerve in live, anesthetized rodents. This technique has been used to confirm that several, but not all, mouse models of neurological disorders display early symptomatic deficits in axonal transport of signaling endosomes [17, 18, 19, 20], indicating that disturbances in the process are not simply a biproduct of neurodegeneration and that impaired transport may play a causative role in only selected neuropathologies. Sciatic nerve exposure and imaging can also be coupled with a battery of transgenic fluorescent reporter strains [31, 32] in order to broaden the cargo types that can be imaged, as performed in ALS models [17, 33]. Furthermore, sciatic nerves can be dissected [34] post-imaging and processed for RNA and protein evaluation, which, when combined with neuromuscular (Fig. 8) [35] and sensory [36] phenotypic analyses in the same animal, can provide a powerful, multifaceted approach to understanding the pathological events underlying peripheral nervous system diseases. The method outlined in this chapter can be used to assess transport of multiple different cargoes in rodent disease models, as well as the impact of aging, potential therapeutics, and signaling molecules, which together will contribute to an improved general understanding of the mechanisms regulating axonal transport in healthy and diseased nervous systems.