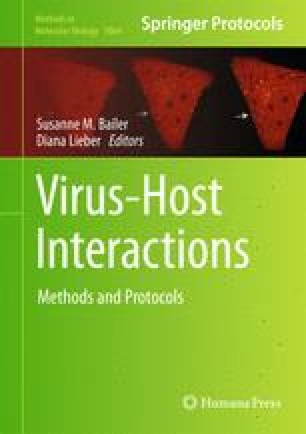 The yeast two-hybrid (Y2H) system is a powerful method to identify and analyze binary protein interactions. In the field of virology, the Y2H system has significantly increased our knowledge of structure and function of viral proteins by systematically assessing intraviral protein interactions. Several comprehensive approaches to determine virus-host interactions have provided insight into viral strategies to manipulate the host for efficient replication and to escape host-derived countermeasures. To expand our knowledge of intraviral and virus-host protein interactions, we here present a Y2H protocol that is well suited for high-throughput screening. Yeast mating followed by liquid handling in a 96-well format as well as fluorescent readout of the reporter system provides a highly standardized and fully automated screening situation. The protocol can either be applied to screen complex host cDNA libraries or protein pairs arrayed for cross-testing. The ease of use, the cost-effectiveness as well as the robotic handling allows for extensive and multiple rounds of screening providing high coverage of protein-protein interactions. Thus, this protocol represents an improved “deep” screening method for high-throughput Y2H assays.

Soon after its development in 1989 [1], the yeast two-hybrid (Y2H) system turned into the most valuable high-throughput method to determine binary protein interactions. In the Gal4-based Y2H system, two proteins to be tested for interaction are fused to either the Gal4 DNA binding domain (bait) or the Gal4 activation domain (prey), and co-expressed in budding yeast cells. In case of interaction of the candidate proteins, the Gal4 transcriptional activator is reconstituted to form a functional entity able to activate one or several reporter genes present in the screening strain.

Over the years, the Gal4-Y2H system has been widely used to determine protein-protein interactions (PPI) in screening situations of varying complexity (for review see ref. 2). Initially, individual proteins were tested for interaction by transforming yeast reporter cells with both one bait and prey plasmid. A more open approach followed the same principle though by exposing a defined bait protein to a whole collection of potential preys which were provided as a cDNA prey library co-expressed with the bait protein. More recently, the yeast mating protocol that takes advantage of the natural ability of haploid yeast cells to mate in order to form diploids provided a much more efficient way to bring bait and prey plasmids together. In contrast to the yeast transformation protocol which is difficult to control and unlikely to result in a screening system covering all potential combinations, the yeast mating protocol allows for efficient cross-combination of a large number of pretransformed bait and prey pairs providing an important prerequisite for high-throughput Y2H screening. Depending on the preys available, Y2H screening can be performed against a complex mixture of preys provided as cDNA libraries [3], alternatively, individual bait and prey pairs can be cross-tested for interaction using array-based mating systems.

Naturally—like all assays—the Y2H system is challenged by limitations. The use of the yeast organism as such could potentially disable the interaction of proteins that require particular species-specific modifications. But in general the environment seems to be sufficiently natural for the analysis of other species as has been demonstrated [4]. Similarly, the nuclear reporter system disables modifications provided by membrane compartments and integral membrane proteins need to be trimmed of their membrane anchors to access the nucleus. And finally, transcriptional activators are not suited to be tested in the Y2H system due to the use of a transcriptional reporter system.

Sceptics perceive the Y2H system as being prone to false-positive interactions. Large-scale analysis, however, revealed that the Y2H system is comparable in specificity to other assays detecting binary protein interactions [4, 5, 6]. Clearly however, the screening protocol is instrumental in providing sufficient sensitivity: (1) To ensure a “deep” screening situation, all proteins potentially interacting have to be exposed to each other in pairwise combinations. High-quality complex cDNA libraries enhance the screening success [3]. Alternatively, large ORF collections like the Mammalian Gene Collection (http://mgc.nci.nih.gov/) have been generated based on whole genome sequencing and subsequent recombinational cloning of all genes of a particular organism. Collections of this size and complexity can be screened either in batch procedures or by cross-testing of all potential protein interactions using arrays. (2) Classically, bait and prey proteins are tagged at their amino-terminal end with the bait fused to the Gal4 DNA binding domain and the prey fused to the Gal4 transcriptional activator. Fusion of tags to the carboxy-terminal end of a bait or a prey as well as testing of a given protein both as bait and prey fusion, allows for more refined screening [7, 8]. This reveals otherwise unrecognized interactions—false negatives—due to misfolding of tagged proteins or steric constraints that a particular tag may impose on the Gal4 reporter system. (3) Technical limitations significantly influence the screening output. Therefore, multiple rounds of screening of the same set of proteins will provide large and more reliable data sets. A Y2H mating protocol that allows for automated and standardized robotic screening is thus of utmost importance in replicate screening of large sets of protein pairs.

Post-screening analysis is required to identify interaction pairs of biological relevance. Prey and bait counts reveal the frequency a given prey or bait has been identified in one or several replicate screen(s). Interactions that were identified repeatedly with one particular bait or prey in screens of varying setups are likely to be specific, while preys isolated only once should be considered as uncertain interactors. Preys that are found very often while screening different baits, are probably “sticky,” that is to say they may interact with other proteins in a nonphysiological manner and should be excluded from the evaluation as likely-false positives [3], while frequently identified bait proteins may partially self-activate the reporter system. Next, high-confidence data sets are subjected to computational analysis (see Friedel,  Chapter 8 of this series). Database searches are performed to generate virus-host protein interactomes which are then connected to other high-throughput screens such as RNAi screens (see Griffiths,  Chapter 5 of this series). Altogether these data are likely to provide insights into so far unknown viral strategies and to reveal viral or host factors that may serve as targets for antiviral therapy.

Meanwhile several methods have been developed that are suited to validate high confidence PPIs identified by Y2H analysis (for review see ref. 2). These include methods for affinity-isolation of co-expressed bait and prey proteins, e.g., the luminescence-based mammalian interactome (LUMIER) pull-down assay [9], and protein fragment complementation assays, e.g., the bimolecular fluorescence complementation assay (BiFC; see Becker and von Einem,  Chapter 3 of this series). While most of these methods are of limited use in high-throughput applications either because the method is rather time-consuming, costly or requires extensive optimization on the level of a single protein pair, the LUMIER assay [9] has been adapted for high-throughput analysis (see Blasche and Koegl,  Chapter 2 of this series). In brief, this assay is based on co-expression of two proteins in mammalian cells: while the bait protein is tagged by the protein A- or Flag-tag and used to immobilize the complex, the co-isolated interacting prey protein is detected via the enzymatic activity of its luciferase fusion partner. Most importantly, like the Y2H system, the LUMIER assay primarily detects binary interactions, provides high confirmation rates and thus represents the best method of choice to validate Y2H interactions.

Whole species Y2H interactomes have been generated for yeast [10, 11], humans [12, 13], D. melanogaster [14], C. elegans [15], and various pathogens (for review see ref. 2, 16; Friedel,  Chapter 8 of this series). The analyses of intraviral interactions are of particular importance in complex viruses like Vaccinia virus [17], herpesviruses [7, 18, 19, 20, 21, 22, 23], papillomaviruses [24], and SARS coronavirus [25]. Moreover, the identification of virus-host protein interactions is instrumental in understanding viral strategies to manipulate the host for efficient replication. Several very recent insights into the virus-host interplay come from high-throughput Y2H studies involving HCV [21], Influenza virus [26], SARS coronavirus [27], the gammaherpesviruses EBV [22], and MHV68 [23] as well as a collection of tumor viruses [24].

Current efforts combine Y2H screening with affinity-purification of larger protein complexes [24]. Since these two strategies are rather complementary than confirmatory, they are well suited to increase the coverage of interactomes. Individual proteins are fused to ProtA-, FLAG-, or GFP-tag to serve as baits for the isolation of protein complexes the composition of which is subsequently analyzed by mass spectrometry (see Rowles et al.,  Chapter 4 of this series). While functional tagging in the chromosomal context is still not feasible for higher eukaryotic proteins, the BAC technology which is available for numerous virus systems allows for genomic tagging of viral genes and thus their use in affinity purification of virus-host protein complexes. This way, PPIs of a particular viral protein can be investigated at different time-points of viral infection and upon infection of various cell systems. Most importantly, in case of viral genes with relevance for the infection cycle, the functional integrity of the viral fusion product can easily be assessed. A powerful combination of the Y2H system and affinity-isolation of protein complexes has recently been presented for four tumor virus families (the papilloma viruses, the polyoma viruses, the herpesviruses, and the adenoviruses) providing high stringency virus-host interactomes [24].

In order to generate a PPI data set of high coverage and high confidence, a high-throughput Y2H screening system is necessary. Here we present a Gal4-Y2H protocol that is well suited for high-throughput screening of intraviral as well as virus-host protein interactions. This method not only allows for simple and cost-effective screening. In particular, it can be fully automated and performed using a liquid handling robot and thus enables screening of extensive bait and prey combinations as well as multiple rounds of library screenings, thereby overcoming major drawbacks of the Y2H system. Thus, this protocol represents an improved “deep” screening method for high-throughput robotic Y2H assays.

If not indicated otherwise, all media and stock solutions are prepared using deionized water, sterilized by sterile filtration (pore size 0.2 μm), and stored at 4 °C. To avoid bacterial contamination, all media are supplemented with penicillin/streptomycin prior to use. Yeast cells are cultivated in a shaking incubator at 30 °C and 200 rpm unless otherwise stated.

This procedure allows cross-testing of single proteins of interest with a defined set of possible interaction partners that are arranged as array (Fig. 1). Hence, any potential interaction pair is tested individually. The protocol displayed here is performed in 96-well MTPs and liquid medium. For convenience, the assay is described using a single bait protein to test against a prey library, although naturally it can also be carried out in the opposite setting.

This protocol describes the yeast two-hybrid screening of individual bait proteins against a prey library consisting of cDNA usually derived from a certain tissue type cloned into a prey vector and pretransformed in yeasts (Fig. 2). This allows testing of single proteins of interest for interaction with a broad spectrum of possible cellular interaction partners. The library-based Y2H screening is performed in 96-well MTPs and liquid medium in analogy to the previously described matrix-based assay (see Subheading 3.1).