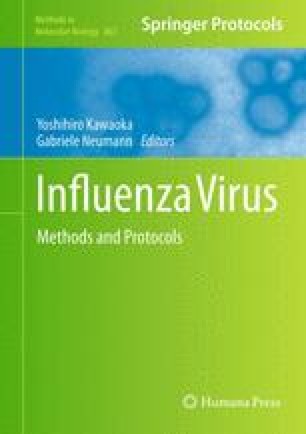 Genetic analysis of sequence data is central to determining the evolutionary history and molecular epidemiology of viruses, particularly those such as influenza A virus that have complex ecosystems involving multiple hosts. Here we provide an outline of routine phylogenetic analyses of influenza A viruses including multiple sequence alignment, selecting the best-fit evolutionary model and phylogenetic tree reconstruction using Neighbor joining, Maximum likelihood, and Bayesian inference.

In recent years, much research has focused on the evolutionary history and molecular epidemiology of influenza A viruses (1). Current efforts in influenza surveillance and sequencing have resulted in phenomenal amounts of data being made publicly available. The recent emergence of the H1N1/2009 pandemic virus provided a timely example of the importance and power of phylogenetic analysis to inform both the planning and response to newly emerged viruses (2). This chapter focuses on the phylogenetic analyses of influenza A virus genomic sequence data to infer their evolutionary history. Basic strategies used to characterize these will be described: from dataset design to alignment and tree building.

The relationships of rapidly evolving RNA viruses like influenza A are best represented by phylogenetic trees (3). Phylogenetic analysis establishes the evolutionary history and relationship between genes by inferring the common history of the genes. To achieve this, homologous regions (e.g., the coding region of the hemagglutinin (HA) gene), are compared in a multiple sequence alignment. Influenza A viruses have a small segmented genome most of which is protein coding (4). This makes multiple sequence alignment easy when compared to other more diverse and sparsely sampled viruses such as coronaviruses. However, influenza A viruses undergo frequent genetic mixing, termed reassortment, and caution must be used during analyses and interpretation of the whole genomes. Inappropriate analysis and/or dataset design can lead to inaccurate results and erroneous interpretations of the molecular epidemiology of influenza A viruses.

Three tree building methods; Neighbor joining (NJ), Maximum likelihood (ML), and Bayesian inference (BI) are described here. These methods are all statistically consistent; however, they are presented in order of increasing statistical robustness and computational cost. These methods require an explicit evolutionary model as accurate and realistic substitution models allow for greater robustness. A model testing and selection tool is also described. While the methods and examples provided here are specific for influenza A viruses, the platforms, programs, and methods are easily portable to other virus families.

These instructions were written with Mac OS    X in mind, but should also be applicable to other operating systems. A list of databases and programs and from where they can be obtained is provided below—where possible we have used freely available programs.

NEXUS format has been extensively used in sequence analysis and is accepted by many different software packages (12). NEXUS format is composed of a number of separate blocks and standardized commands. These blocks can either be public or private blocks. Public blocks are utilized by multiple programs and house information about taxa (which in this case are viruses), morphological and molecular characters, genetic distances, genetic codes, assumptions, datasets, or phylogenetic trees. In contrast, private blocks contain information relevant to single programs such as PAUP*, GARLI, or MrBayes. The format is naturally extensible and flexible, and can be created from scratch using a text editor or exported from other software that creates NEXUS formatted files (e.g., Se-Al: File>Export>File Format).

The first line in a NEXUS format file is “#NEXUS”. This tells the software program that the file is in NEXUS format and will contain information in blocks that start with “begin” and end with “end”—with each remark separated by a semi-colon (;). Small variations exist in how different computer programs read the NEXUS format and these are most often associated with the treatment of special characters in taxa names. For example, “/” is unrecognized by PAUP* unless defined in the DATA block. In order to resolve these commonly encountered issues taxa names are often read enclosed in single quotation marks (i.e., ‘A/mallard/Alberta/300/1977(H4N3)’). However, single quotes are not recognized by MrBayes. Comments can be included in the NEXUS file but must be enclosed within square brackets “[ ]”, which informs the program to ignore the enclosed text. An example of NEXUS format is as follows:

A great advantage of a NEXUS file is that a block of instructions can be placed at the end of the file that can instruct programs, such as PAUP*, when conducting analyses. This will be addressed in Subheading 3.4.

Multiple sequence alignments form the basis for all subsequent analyses, such as evolutionary model selection and tree building. Influenza A viruses have a small genome consisting of primarily protein-coding regions, therefore alignment is fairly simple. But incorrect alignments (especially for datasets with greater genetic diversity) may lead to dramatically misleading results; therefore, extreme caution should be taken to maximize the correctness of the alignment (see Note 3).

jModelTest uses hierarchical likelihood ratio tests (hLRTs) and the Akaike Information Criterion (AIC) to find the evolutionary model that best fits the particular sequence alignment that you are analyzing (8) (see Note 7). If you modify your dataset you should recalculate the evolutionary model.

PAUP* is one of the most widely used phylogenetic software packages. The software is not free but is powerful, flexible, and reliable. The manual included with this program contains an extensive command reference that is very useful.

MrBayes is a program for the Bayesian estimation of phylogeny. Bayesian phylogenetics has been gaining prominence and acceptance in evolutionary science, especially with dramatically improved computational power. Importantly, Bayesian phylogenetics sample many equivalent trees in the tree space in contrast to neighbor joining and maximum likelihood methods, which will produce only a single tree. The phylogenetic tree produced is based on all of these trees, which is known as the posterior probability distribution of trees. This computation is analytically difficult and for large datasets impossible. MrBayes uses a simulation method known as Metropolis-coupled Markov Chain Monte Carlo (or MCMC) to overcome this difficulty.

G.J.D.S. is supported by a career development award under National Institutes of Health, National Institute of Allergy and Infectious Disease contract HHSN266200700005C and G.J.D.S., J.B. and D.V. by the Duke–NUS Signature Research Program funded by the Agency for Science, Technology and Research, and the Ministry of Health, Singapore.