Ubiquitin Family Modifiers and the Proteasome 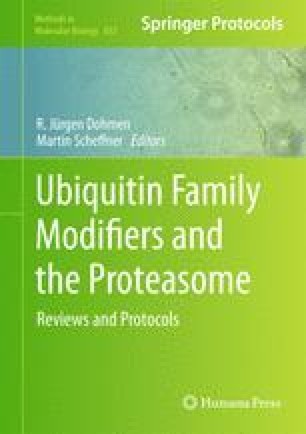 Ubiquitin Family Modifiers and the Proteasome pp 141-149 | Cite as

ISG15 is a ubiquitin-like modifier that is expressed in response to type 1 interferon signaling (IFN-α/β) and plays a role in antiviral responses. The core E1, E2, and E3 enzymes for ISG15 are Ube1L, UbcH8, and Herc5, respectively, and these are all also induced at the transcriptional level by IFN-α/β. We recently showed that Herc5 associates with polysomes and modifies target proteins in a cotranslational manner. Here, we describe the expression of the core conjugating enzymes in human cells, the detection of ISG15 conjugates, and the methods for fractionation of Herc5 with polysomes.

ISG15 is a 17 kDa ubiquitin-like modifier that is rapidly induced by type 1 interferon signaling. It was one of the first interferon-stimulated gene (ISG) products identified (1) and the first ubiquitin-like modifier, after ubiquitin, to be discovered (2, 3). As an interferon-induced protein, ISG15 was long presumed to function in the innate immune response to infectious agents, but it is only in recent years that it has been shown to have antiviral activity against a broad range of virus types, including Influenza, Ebola, Sindbis, Herpes, and HIV (4, 5, 6, 7). Several virus types also appear to have evolved mechanisms for blocking the antiviral effects of ISG15. The Influenza NS1B protein and the Vaccinia E3 protein bind noncovalently to ISG15 and block conjugation (8, 9), and the SARS and Crimean Congo Hemmorhagic Fever virus encodes a protease that functions as a deconjugating enzyme for ISG15 (10, 11).

ISG15 is roughly twice the size of ubiquitin and resembles a translational dimer of ubiquitin, with two ubiquitin-like domains, each approximately 30% identical to ubiquitin. The X-ray crystal structure of free ISG15 has been solved, and there appears to be little or no stable interactions between the two domains (12). ISG15 is the only Ubl where the last six residues of the processed form of ISG15 are identical to those of ubiquitin (LRLRGG). While there may be no further significance to this C-terminal identity, this may be the basis of confusion over the identity of specific deconjugating enzymes for ISG15 (13, 14, 15). Interestingly, ISG15 was also reported to be a secreted protein with cytokine activities (16, 17); however, the relationship between this function and its intracellular function as a protein modifier is unknown.

There is a single major E1, E2, and E3 enzyme for ISG15 in human cells, and all of these are induced at the transcriptional level by type 1 interferons. Ube1L is the E1 enzyme (8), and the E2 enzyme is UbcH8/Ube2L6 (18, 19, 20). UbcH8 has been widely reported to function with ubiquitin (21, 22, 23, 24, 25, 26, 27), but determination of kinetic constants of Ube1L and Ube1 for UbcH8 and UbcH7 suggested that UbcH8 is unlikely to function as a ubiquitin E2 in vivo (18). The major E3 for ISG15 is human Herc5, a HECT domain ligase with N-terminal RCC1 repeats (28, 29). Herc5 siRNA knockdown leads to a dramatic decrease in overall ISG15 conjugation activity, affecting conjugation to all apparent cellular target proteins (29). Herc5 is the only human HECT E3 known to be a ligase for anything other than ubiquitin. Co-expression of ISG15, Ube1L, UbcH8, and Herc5 in non-interferon stimulated cells reconstitutes robust ISG15 conjugation to the broad spectrum of target proteins (Fig. 1), consistent with the notion that these enzymes represent the core interferon-induced components of the ISGylation system (28, 29, 30). Plasmids expressing mutant forms of each of these components can be used as negative controls when examining ISGylation (Fig. 1). The C-terminal ubiquitin fold domain (UFD) of Ube1L is required for interaction with UbcH8 and deletion of this domain (Ube1LΔUFD) results in the inability of Ube1L to transfer ISG15 to UbcH8. F62 of UbcH8 is a conserved residue among E2 proteins that has been shown to be critical for the E2/E3 interaction, and mutation of this residue (UbcH8 F62A) prevents transfer of ISG15 from UbcH8 to Herc5. Mutation of the active site cysteine of Herc5 (Herc5 C994A) results in a catalytically inactive Herc5 incapable of supporting ISG15 conjugation. Co-transfection of ISG15 with the mutant forms of its conjugating enzymes prevents ISGylation of target proteins; however, a low level of ISGylation may be observed when using a mutant form of only one of the enzymes or leaving out one of the enzymes (Fig. 1). This is due to a basal level of each of the conjugating enzymes and varies depending on the cell line used in the experiment (29).

Several proteomics studies, together, identified approximately 300 cellular proteins that are targeted for ISGylation (28, 30, 31, 32, 33). This raised the question of how a single ligase, Herc5, could recognize such a diverse set of proteins that shared no apparent distinguishing features. In addressing this problem, we discovered that the range of substrates went far beyond those identified by proteomics, and that nearly all proteins tested, including foreign proteins (bacterial, yeast, viral) could be ISGylated, provided that they were being synthesized in the same window of time that the conjugation system was active (34). The ISGylation of newly synthesized proteins suggested that modification might occur cotranslationally. We discovered that endogenously expressed Herc5 (as well as HA-tagged Herc5) cofractionated with polysomes. In addition, a mutant lacking the N-terminal RCC repeats and incapable of supporting ISGylation of target proteins did not cofractionate with polysomes. With the discovery that Herc5 fractionates with polysomes, we proposed that Herc5 modifies proteins stochastically in a cotranslational manner as they emerge from the ribosome. An implication of this model is that, in interferon-stimulated cells, newly synthesized viral proteins may be the key biologically relevant targets of this system, while modification of cellular proteins may be largely collateral (34).

Some of the outstanding mechanistic questions concerning ISGylation are (1) what factors determine the sites and efficiency of modification? (2) how is Herc5 tethered to the ribosome and how does it engage nascent polypeptides? and (3) what are the biochemical consequences of ISGylation on target proteins? In this chapter, we describe methods for generating and detection of ISG15 conjugates in either interferon-stimulated or transfected cells and methods for cofractionating Herc5 with polysomes.

3.1 Production and Detection of ISG15 Conjugates in Interferon-β-Stimulated Cells

3.2 Production and Detection of ISG15 Conjugation in Noninterferon-Stimulated Cells

3.3 Co-fractionation of Herc5 with Polysomes