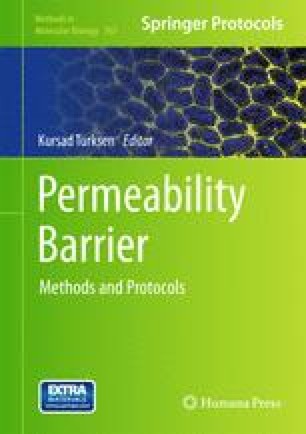 Epithelial tissue guarantees proper performance of many organs, e.g., the kidneys, the gastrointestinal organs, and endocrine glands. Epithelial layers are responsible for the formation and maintenance of separate compartments with distinct solute composition. This is achieved by epithelial layers forming a barrier between the two compartments and concomitantly allowing site-directed transepithelial transport, uptake or secretion of electrolytes, energy substrates, proteins, and other solutes.

Research on epithelial tissue functions has highly profited from the establishment of tissue culture technologies allowing to cultivate primary epithelial cells or established epithelial cell lines. A property of transporting epithelia cultured in vitro that has long been noted is the formation of the so-called domes on solid growth supports, which represent fluid filled blisters between the solid growth surface and the cell layer. Formation of domes is regarded as a sign of active transport processes and an intact epithelial barrier function due to functional tight junctional cell–cell contacts. A novel methodology for long-term live-cell light microscopy is described in the present article, which allows the monitoring of the dynamic nature of structures, such as epithelial domes over days to weeks of tissue culture (“under the microscope”).

The presented work was part of scientific projects supported through grant No. P17583-B13 of the Austrian Science Fund (FWF, Dr. J. Lechner) and grant No. UNI-0404/229 of the Tyrolean Science Fund (Tiroler Wissenschaftsfond, Dr. J. Lechner). The live-cell imaging device was developed by Dr. T. Seppi, H. Gatt, and M. Voelp (patent AT 500473 B1 2006). Their work was supported through grants NanoBII-815828: PolyCell and NanoBII-0353: GEMID of the Austrian NANO Initiative (a thematic program of the FFG – Austrian Research Promotion Agency).

Dynamics of dome formation monitored by cell culture under the microscope

The focal plane was set to sharply represent the cells that were well attached to the growth surface. Areas of dome formation comprise cell groups that detach from the surface forming fluid-filled blisters. Domes can be recognized by groups of cells moving out of the focal plane showing less sharp cellular structures and cell–cell interfaces.

At the beginning of the sequence, small regions with dome formation are already present, which merge into a very large dome in the course of the movie. It is noteworthy to see pulsating up and down movements of the whole dome area after the big dome has formed.

In the first few hours, sporadic apoptotic cell extrusion can be monitored at the margins of domes, which are highlighted in Fig. 2b. (Visit http://extras.springer.com/ to view the movie.)

A sequence of microscopic images of LLC-PK1 cells in culture on borosilicate glass as growth support is shown as a motion picture series. Single light microscopic images were taken every 2 min. Part 1 of the movie shows cells after attachment, which start to divide and fill up the growth support area using a 10× microscope objective, part 2 shows in more detail cells forming a confluent monolayer using a 20× objective, part 3 shows cellular movements and cell death after the addition of an apoptosis-inducing toxin (100 μM cisplatin) to the culture medium monitored by Nomarski differential interference contrast microscopy using a 40× objective. Part 1 and 2 were recorded using phase contrast microscopy. Copyright: inventive-ts, Innsbruck, Austria, published with permission. (Visit http://extras.springer.com/ to view the movie.)