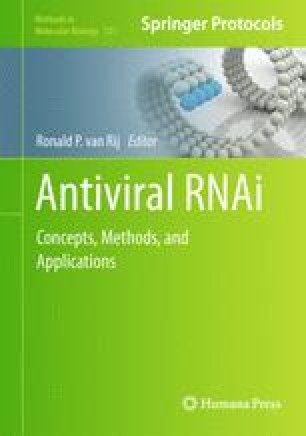 RNA interference (RNAi) is an evolutionarily conserved mechanism for sequence-specific target RNA degradation in animals and plants, which plays an essential role in gene regulation. In addition, it is believed to function as a defense against viruses and transposons. In recent years, RNAi has become a widely used approach for studying gene function by targeted cleavage of a specific RNA. Moreover, the technology has been developed as a new therapeutic option that has already made its way into clinical testing. Treatment of viral infections remains a serious challenge due to the emergence of new viruses and strain variation among known virus species. RNAi holds great promise to provide a flexible approach that can rapidly be adapted to new viral target sequences. A major challenge in the development of an efficient RNAi approach still remains the design of small interfering RNAs (siRNAs) with high silencing potency. While large libraries with validated siRNAs exist for silencing of endogenously expressed genes in human or murine cells, siRNAs still have to be designed individually for new antiviral approaches. The present chapter describes strategies to design highly potent siRNAs by taking into consideration thermodynamic features of the siRNA, as well as the structural restrictions of the target RNA. Furthermore, assays for testing the siRNAs in reporter assays as well as options to improve the properties of siRNAs by the introduction of modified nucleotides will be described. Finally, experimental setups will be outlined to test the siRNAs in assays with infectious viruses.

Despite the advances in medical sciences, the threat posed by viruses has remained a serious problem, particularly outside industrialized countries. While the human immunodeficiency virus (HIV) and the hepatitis B and C viruses (HBV, HCV) continue to claim millions of lives every year, viruses like the SARS coronavirus appear as human pathogens and novel variants of well-known viruses, like the H1N1/09 influenza virus, cause pandemics of global dimensions. Thus, there is a pressing unmet medical need to develop new antiviral drugs. While small molecules have dominated antivirals for decades, biologics like monoclonal antibodies and nucleic acids therapies have more recently been considered promising alternatives (1).

Among the various oligonucleotide-based strategies, RNA interference (RNAi) is widely regarded as a particularly powerful technology (2, 3, 4). RNAi is a posttranscriptional gene silencing mechanism that is triggered by double-stranded RNA. For applications in mammalian cells, small interfering RNAs (siRNA) of approximately 19 base pairs with two nucleotide overhangs at the 3′ ends of both strands become incorporated into the RNA-induced silencing complex (RISC) and induce cleavage of a complementary target RNA. Within just a few years, RNAi has become a standard molecular biological method to study gene functions. Moreover, the technology has been developed into a new therapeutic approach and approximately a dozen clinical trials based on RNAi are currently underway. Among these trials are various applications of RNAi to treat infections with the respiratory syncytial virus, HBV and HIV (5).

Silencing of endogenously expressed genes has become a routine procedure and predesigned or validated siRNAs with silencing guarantee against virtually any human or murine gene are commercially available. In contrast, the design of siRNAs with high antiviral activity still remains a challenging task. Several features have been described that influence the success of an RNAi approach (6):

Most of the publically available tools for the design of siRNAs exclusively optimize the base composition of the siRNA. More recently, however, a design algorithm was developed for the selection of siRNA with particularly high potency and specificity, which not only focuses on the design of the siRNA, but also takes into consideration the secondary structures of the siRNA and their target site (7).

A major challenge for the long-term inhibition of viruses by RNAi is the prevention of viral escape. Thus, siRNAs need to be directed against well-conserved target sites. Unfortunately, simply directing siRNAs to protein coding regions is insufficient, since silent mutations can cause the siRNAs to lose their inhibitory potential. Target regions with an important function in the structure of the RNA may prove to be a better choice to avoid viral escape. It has, for example, been shown that an siRNA against the highly conserved cis-acting replication element (CRE) was capable of inhibiting various enteroviruses over a long period, while an siRNA targeted against protein-encoding regions of the RNA, which are not organized into functional three dimensional structures, led to rapid viral escape (8). Since even the most careful selection of a single target site might be insufficient for sustained viral silencing, use of multiple siRNAs against multiple target sites may be necessary to prevent viral escape. In the case of coxsackievirus B3 and HIV-1, resistance rapidly emerged when single molecules were used, but a combination of three or four siRNAs, respectively, targeting distinct regions of the genome, were able to prevent the emergence of resistance (9, 10).

A general requirement for the application of RNAi in vivo is the stabilization of siRNAs by the introduction of modified nucleotides (11). Based on the experience in the antisense field, numerous modified nucleotides have been assessed for their applicability to enhance the stability of siRNAs against nucleases. Phosphorothioates, nucleotides with modifications at the 2′ position (e.g., 2′-O-methyl-RNA and 2′-fluoro-nucleotides), as well as locked nucleic acids are among the most widely employed building blocks for RNAi applications. A fully modified siRNA with a drastically increased half-life in human serum had a significantly higher activity in a vector-based in vivo model of HBV infection as compared to the unmodified form (12). Furthermore, the introduction of modified nucleotides not only improves the stability of siRNAs, but can also reduce off-target effects (13) and improves the antiviral activity of siRNAs directed against highly structured target regions (14).

The present chapter describes a systematic method for the design of highly potent antiviral siRNAs (summarized in Fig. 1). Experimental procedures to test these siRNAs in reporter assays (GFP Reporter Assay and Dual-Luciferase Reporter Assay) as well as in assays with infectious viruses (Cell viability assay and Plaque reduction assay) will be outlined. Finally, options to improve the properties of siRNAs by introduction of modified nucleotides will be described.

Exclude all siRNAs whose target structure showed strong variability based on at least ten folded structures (≥5 different target structures). Furthermore, accessible target sites are characterized by low ΔG local values (18). Therefore, select siRNAs in the order of their ΔG local values with a threshold of about −15 kcal/mol (19). The selected siRNAs are potentially efficient siRNAs and their silencing efficiency can further be tested in Reporter Assays (see Subheading 3.2 and Note 6).

The protocol for TOPO cloning described in the following section is a shortened version of the instruction manual (see Note 8). The TOPO cloning allows the ligation of the PCR-amplified target sequence of the virus into either pcDNA3.1/CT-GFP-TOPO or pcDNA3.1/NT-GFP-TOPO. The terms CT and NT indicate that GFP will be expressed fused to, respectively, the C-terminus and N-terminus of the target sequence.

For a first functional assay of the siRNAs in a reporter assay, it is advisable to use the cell line which will also be employed for virus assays. As an example, a protocol for transient transfection of HeLa cells in 24-well plates using Lipofectamine 2000 transfection reagent will be described (see Note 14). The transfection efficiency into other cell lines can be tested by transfection of a random siRNA that is labeled with Cy3 at the 5′ end of the siRNA sense strand (siRNA can be transfected with or without a reporter plasmid). We recommend the use of Cy3, as FITC is not distinguishable from GFP in fluorescence microscopy.

If one of the TOPO vectors described above served as a reporter in cotransfection with siRNAs (see Subheading 3.3), the first analysis of siRNA silencing efficiency can be performed using fluorescence microscopy. This requires a filter for GFP detection. After replacement of medium from the transfected culture cells with 500 μl PBS, GFP expression of the reporter plasmid is determined (see Fig. 3). Highly efficient siRNAs strongly reduce GFP expression compared to the transfection of reporter plasmid without an siRNA, while the control siRNA should have no effect. These results should be confirmed by Western Blot analysis as described in Subheading 3.4.1. In the case of psiCHECK-2 cotransfection, both Renilla and Firefly luciferases will be measured (see Subheading 3.4.2).

A crucial test is the evaluation of the antiviral activity of designed siRNAs in assays with infectious virus. Two methods for in vitro testing are described below. The cell viability assay is an indirect method to quantify the efficiency of an siRNA, whereas the plaque reduction assay can show the direct inhibition of virus replication by an siRNA.

The XTT-based cell viability assay is used for the quantification of cell proliferation and viability. Metabolically active cells cleave the yellow tetrazolium salt to an orange formazan dye. The absorbance measured at a defined wavelength directly correlates with cell viability. We recommend the use of the XTT reagent due to its high sensitivity compared to other tetrazolium salts, such as MTT.

Generally, each plaque has its origin in the viral infection of a single cell. The reduction of virus titer shows directly the efficiency of an siRNA as the virus spread is prevented.
$$\begin{array}{l}\text{pfu/ml}=\text{counted}\,\text{plaques}/(\text{dilution}\,\text{factor}\times \\{}\text{volume}\,\text{of}\,\text{diluted}\,\text{virus}\,\text{added}\,\text{to}\,\text{the}\,\text{well}).\end{array}$$
An alternative protocol can be used to accelerate the staining (see Note 22). Efficient siRNAs are able to reduce the virus titer at least one order of magnitude. Figure 4 shows an example of such a plaque reduction assay.

With the strategy described here, it will be possible to identify efficient siRNAs against virtually any given virus – as we have recently exemplified for echovirus 30 (22). The next step will be to transfer the antiviral RNAi approach to an in vivo model. One of the main challenges will then be efficient delivery of the siRNA to the desired target tissue. The following chapters describe virus-based approaches to deliver shRNA expression cassettes as well as different strategies for the application of chemically presynthesized siRNAs.