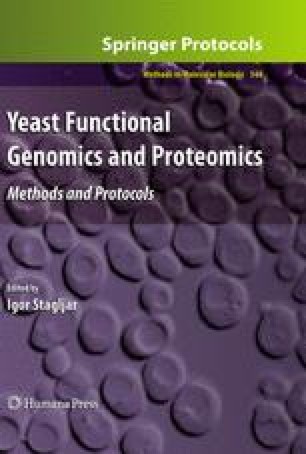 Protein microarrays containing nearly the entire yeast proteome have been constructed. They are typically prepared by overexpression and high-throughput purification and printing onto microscope slides. The arrays can be used to screen nearly the entire proteome in an unbiased fashion and have enormous utility for a variety of applications. These include protein–protein interactions, identification of novel lipid- and nucleic acid-binding proteins, and finding targets of small molecules, protein kinases, and other modification enzymes. Protein microarrays are thus powerful tools for individual studies as well as systematic characterization of proteins and their biochemical activities and regulation.

Protein arrays are typically prepared from large overexpression libraries in which proteins are overexpressed, purified in a 96-well format, and then spotted at high density onto microscope slides. The arrays are then probed using molecules containing fluorescent or other probes. To date, protein microarrays have been prepared for yeast (6,000), Arabidopsis (5,000), humans (8,000), and coronaviruses, as well as a number of bacteria ( 3, 4, 5, 6, 7 ).

Thus far, protein microarrays have been used for a wide variety of applications. These include enzymatic assays and interactions with proteins, lipids, small molecules, and nucleic acids ( 3, 8 ). One advantage of protein microarrays is that an entire proteome can be screened in an unbiased fashion, thereby leading to the discovery of novel activities that were not anticipated. For example, screening of a yeast protein chip using biotinylated liposomes revealed many new lipid-binding proteins including enzymes involved in glycolysis ( 3 ), and screening of a yeast proteome chip with yeast DNA revealed a novel metabolic enzyme, Arg5,6, that is associated with DNA and appears to regulate mitochondrial gene expression ( 9 ).

Protein microarrays have been used for many other applications as well. Recently, arrays that contain most yeast transcription factors have been prepared and probed using motifs that are conserved across yeast species but whose binding protein was not known ( 10 ). This study assigned candidate binding proteins for specific sequences, one of which was confirmed. Protein microarrays have also been used to assess antibody specificity ( 11 ) and for identification of autoreactive antibody in patients with diseases such as autoimmune diseases and cancer and thereby find candidate biomarkers and insights into the disease state ( 5 ). Lastly, protein microarrays can be used to identify substrates of modification enzymes such as kinases and ubiquitation enzymes ( 12, 13 ).

12.2.4 Preparation of Proteins for Protein Microarray

12.3.1.1 Constructing a Large Number of Clones for Protein Arrays

Once proteins are prepared they must be printed onto surfaces, typically microscope slides. A variety of different surfaces exist for preparing protein microarrays. They include nitrocellulose and aldehyde surface chemistries for chemical attachment through lysines and affinity attachment methods such as nickel-chelated slides for attaching His tagged proteins and glutathione for affinity attachment ( 15, 3, 16 ). The different surfaces have advantages and disadvantages; nitrocellulose allows the attachment of large amounts of protein, and it along with chemical attachment methods results in random orientation of proteins away from the surface. It is likely that the activity of the attached molecule is lost for many molecules attached by these methods. Moreover, binding of probes to regions near the surface is likely to be sterically inhibited. Affinity attachment methods are more likely to retain activity and orient proteins away from the surface, although random presentation of protein surfaces from the slide is not attained. Different surfaces yield different backgrounds and it is prudent to test several surfaces whenever a new assay is employed.

Protein microarrays can be screened for a wide variety of activities. A common activity is interaction with other proteins. One of the best ways to perform this is to produce the protein of interest with an epitope tag (we prefer to use the V5 epitope for yeast) and probe a yeast proteome chip as follows: