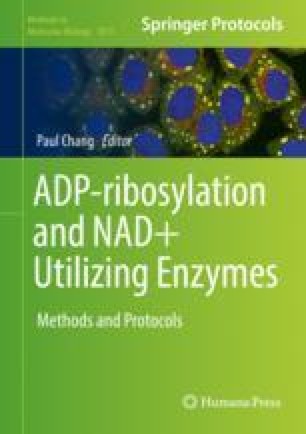 Preparation of Recombinant Alphaviruses for Functional Studies of ADP-Ribosylation

Recently we characterized the mono(ADP-ribosyl) hydrolase (MAR hydrolase) activity of the macrodomain of nonstructural protein 3 (nsP3MD) of chikungunya virus. Using recombinant viruses with targeted mutations in the macrodomain, we demonstrated that hydrolase function is important for viral replication in cultured neuronal cells and for neurovirulence in mice. Here, we describe the general cell culture and animal model infection protocols for alphaviruses and the technical details for biochemical characterization of the MAR hydrolase activity of nsP3MD mutants and the preparation of recombinant viruses incorporating those mutations through site-directed mutagenesis of an infectious cDNA virus clone.

Alphaviruses are mosquito-borne plus-strand, enveloped RNA viruses that cause a variety of human diseases ranging from rash and arthritis by the “Old World” viruses to encephalitis by the “New World” viruses. The encephalitic alphaviruses, like Venezuelan, western, and eastern equine encephalitis viruses, are endemic in the Americas, and recently introduced arthritic alphaviruses like chikungunya virus (CHIKV) can also cause atypical complications like encephalitis [1, 2]. Alphaviruses have an approximately 11.7 kilobase (kb) positive-sense RNA genome with a 5′ 7-methylguanosine cap and 3′ poly-A tail that encodes four nonstructural proteins (nsP1–4) and six structural proteins (C, E3, E2, 6K/TF, and E1) that are expressed from a subgenomic RNA [3]. Recently, we have shown that the macrodomain of viral nonstructural protein 3 (nsP3) of CHIKV enzymatically reverses the protein modification mono(ADP-ribosyl)ation in vitro. Macrodomains are a conserved protein fold found from archaea to higher eukaryotes and are characterized by their binding to the small molecule ADP-ribose and its derivatives [4]. The viral macrodomain is part of the nonstructural protein in a subset of positive-strand RNA viruses, such as alphaviruses, coronaviruses, and hepatitis E virus [5, 6]. We identified and mutated residues in nsP3 critical for mono(ADP-ribosyl) binding and hydrolase (MAR hydrolase) activity, and using mutants with decreased MAR hydrolase activity, we demonstrated that reduction of this activity impairs viral replication in cultured mammalian and mosquito cells and virulence in neonatal mice [7].

Reverse genetic approaches have been extensively used in alphavirus research to understand virus biology and replication [8, 9], vector competence [10, 11, 12, 13], attenuation and virulence [14, 15], and immunogenicity [16, 17]. The approach involves the construction of an infectious cDNA clone by incorporating a DNA copy of the viral RNA genome into a plasmid vector. With incorporation of the bacteriophage T7 or SP6 RNA polymerase promoters, the cDNA can be in vitro transcribed to produce full-length viral RNA transcripts. Transfection of the transcribed RNA into permissive cells results in production of infectious virus. To understand a loss or gain of gene function, variants or mutants are made in the infectious cDNA clone to produce mutant viruses in the same virus background for analysis.

In our studies of the MAR binding and hydrolase activities of the nsP3 macrodomain, we introduced mutations into the macrodomain region of nsP3 in the infectious cDNA clone of the 181/clone 25, the live attenuated vaccine strain of CHIKV . The 181/25 virus was derived from the Southeast Asian strain AF15561 by 18 plaque-to-plaque passages in MRC-5 human lung fibroblasts [18]. The infectious clone of 181/25 was prepared by employing site-directed mutagenesis to introduce five non-synonymous mutations into the parent clone 15,561 [10]. The parent clone 15,561 in a modified pSinRep5 plasmid was engineered to possess a SP6 RNA polymerase promoter at the 5′ terminus and a poly(A) tail, followed by a NotI restriction site at the 3’terminus [15] (Fig. 1). Because 181/25 is a vaccine strain, we reversed the attenuating mutations I12T and R82G [15] in the E2 glycoprotein to generate a recombinant CHIKV strain (181/25E2 I12T/R82G) that is virulent for newborn mice.
In this chapter, we describe the technical details of our strategies for biochemically characterizing the nsP3MD mutants with MAR hydrolase assays and for incorporating the mutations into the viral genome by site-directed mutagenesis. Here, the general protocols for cell culture of alphaviruses, infection of mice, and generation of recombinant mutant viruses using chikungunya virus 181/25 infectious cDNA clone are explained. Variations in the methodology for other alphaviruses, particularly the prototype Sindbis virus, are also mentioned. A summary of the methodology is outlined in Fig. 2.

2.2 Site-Directed Mutagenesis of cDNA and Transformation of Competent Bacteria

2.3 Linearizing the Mutant Plasmid and In Vitro RNA Transcription

2.8 Quantification of Virus by Plaque Assay

The infectious cDNA clone which is the double-stranded copy of the viral genome carried on a plasmid vector is modified for introducing mutation by PCR-based site-directed approach, followed by transformation to the E. coli cells. The mutant clone is then subjected to sequencing for checking the presence or absence of mutation.

Nuclease-free water Make up to 50 μL

3.3 Linearizing the Mutant Plasmid DNA and In Vitro RNA Transcription

In order to make the mutant viruses, the mutant full-length cDNA clones are linearized, purified, and in vitro transcribed to RNA.

Linearize 3 μg of plasmid containing the desired mutation in the full-length cDNA with NotI enzyme in a 100 μL reaction (see Note 7 ). Incubate the reaction for 16–18 h at 37°C. The component volumes for the reaction are:

Nuclease-free water Make up to 100 μL

Analyze 5 μL of the digested reaction by gel electrophoresis to ensure that the plasmid is fully linearized.

Nuclease-free water Make up to 30 μL

Purify the RNA transcripts using the MEGAclearTM kit, and elute with 30 μL of RNase-free water (see Note 9 ). Generally, the expected concentration of the RNA synthesized from a standard 30 μL reaction starting from 1.5 μg of DNA is within a range 2–3 μg/μL.

This section deals with the transfection of the CHIKV RNA transcript into permissive cell lines to recover the clone-derived virus.

3.5 Viral RNA Extraction and Sequencing of the Mutated Macrodomain

The presence of the mutation in the clone-derived virus is verified by RNA isolation, followed by reverse transcriptase PCR, and finally sequencing.

Nuclease-free water Make up to 50 μL

In vitro infection in cells involves plating cells, calculating the amount of the infectious virus to be added, infection of the cells, followed by incubation for the respective time points.

3.10 Measurement of IgG and IgM Antibody Responses of Infected Mice

This work was supported by a Johns Hopkins Catalyst Award (AKLL) and research grants from the Johns Hopkins University School of Medicine Sherrilyn and Ken Fisher Center for Environmental Infectious Disease (DEG and AKLL). This work is also in part supported by R01GM104135S1 (AKLL and RLM) and T32CA009110 (RLM) from the U.S. National Institutes of Health.