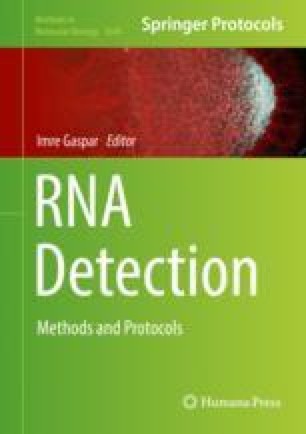 The lack of an effective, simple, and highly sensitive protocol for fluorescent in situ hybridization (FISH) at the Drosophila larval neuromuscular junction (NMJ) has hampered the study of mRNA biology. Here, we describe our modified single molecule FISH (smFISH) methods that work well in whole mount Drosophila NMJ preparations to quantify primary transcription and count individual cytoplasmic mRNA molecules in specimens while maintaining ultrastructural preservation. The smFISH method is suitable for high-throughput sample processing and 3D image acquisition using any conventional microscopy imaging modality and is compatible with the use of antibody colabeling and transgenic fluorescent protein tags in axons, glia, synapses, and muscle cells. These attributes make the method particularly amenable to super-resolution imaging. With 3D Structured Illumination Microscopy (3D-SIM), which increases spatial resolution by a factor of 2 in X, Y, and Z, we acquire super-resolution information about the distribution of single molecules of mRNA in relation to covisualized synaptic and cellular structures. Finally, we demonstrate the use of commercial and open source software for the quality control of single transcript expression analysis, 3D-SIM data acquisition and reconstruction as well as image archiving management and presentation. Our methods now allow the detailed mechanistic and functional analysis of sparse as well as abundant mRNAs at the NMJ in their appropriate cellular context.

In situ hybridization has been a mainstay of cell and developmental biology for determining where and when genes are expressed in wild-type or mutant cells and tissues. The recent development of single molecule fluorescent in situ hybridization (smFISH) methods have increased the sensitivity, ease of application of FISH methodology, and enabled multiplexing with antibodies against specific proteins [1, 2, 3]. This next generation FISH approach uses approximately 50 short, fluorochrome-labeled DNA oligonucleotide (oligos) probes, which are approximately 20 bp in length. Such tiled oligonucleotides sets are designed to bind to nonoverlapping regions of a transcript. The large number of probes means that the technique is sensitive enough to detect the majority of individual mRNA molecules in a tissue, achieving a very high signal–noise ratio. The detected individual transcripts appear as bright foci and any off-target labeling by individual oligonucleotides appears as dim, diffuse signal, or low-intensity punctae [1]. Using shorter probes also provides better tissue penetration and enables less harsh hybridization conditions, maintaining antigenicity for antibody staining and making the technique especially suitable for whole mounted tissues.

The study of RNA biology in neuroscience has been held back by the lack of suitable methods for high quality in situ hybridization in some key experimental models and tissues. Drosophila in particular is an excellent model system for elucidating molecular mechanisms of neuronal development and function in all parts of the nervous system [4, 5, 6]. One of the key models for studying synaptic plasticity and physiology is the larval neuromuscular junction (NMJ) preparation of the body wall musculature. This system also has tremendous potential for studying the role of RNA metabolism in plasticity and physiology [7, 8]. However, while smFISH has been used successfully in Drosophila oocytes and embryos [9, 10], only traditional RNA FISH methods have been used in the NMJ [11, 12, 13]. Such methods have not been widely adopted due to variability, poor signal–noise ratios, and limited sensitivity for sparse transcript expression. Here, we describe our modified smFISH protocol for visualizing single mRNA molecules in the larval NMJ together with endogenous fluorescent proteins and antibody markers. To complement the single transcript sensitivity of smFISH, we used 3D structured illumination microscopy (3D-SIM), a super resolution imaging technique that provides enhanced spatial information regarding the RNA’s subcellular environment [14]. The increased optical resolution of methods like 3D-SIM [15] provide a more accurate representation of whether a transcript resides in or is adjacent to a particular RNP granule or subcellular compartment (see Note 1 ). Furthermore, the relatively mild hybridization and wash conditions required for smFISH allow tissue morphology to be well preserved for meaningful biological interpretations.

Resolving individual transcripts in an intact tissue is extremely powerful for investigating gene expression and mRNA localization. To fully realize the benefits of single transcript detection, an automated quantification workflow saves time and reduces variability. Various computer programs have been developed to automate segmentation and quantification of the number of foci in an image. We used FindFoci, an open source ImageJ (Fiji) plugin that is part of the GDSC suite [16]. We also used an open source MatLab program called FISHQuant that allows automated segmentation and fluorescence intensity calculations [17], and a user-friendly commercial solution, namely the spot counting algorithm in Imaris. We found that all three programmes performed similarly with our in situ data in automated quantitation of transcript numbers. To quality control acquisition of raw 3D-SIM data and the 3D-SIM reconstructions we used the ImageJ (Fiji) plugin SIMcheck [18]. Finally, we managed the relatively large number and size of image files with OMERO and created summary figures with OMERO-Figure, a platform that enables public distribution of the raw image files .

DNA oligonucleotide probes (Stellaris® RNA FISH) were purchased from LGC BioSearch Technologies (California, USA) and sequences were selected using the company’s online probe designer. Alternatively, one could design 30–50 3′ primary amine labeled 18-mer DNA oligonucleotides that cover a region of the chosen gene, order a plate of HPLC-purified oligonucleotides (available from most manufacturers who synthesize PCR primers) and conjugate fluorochromes to the probes oneself [3]. Probes described here were labeled by the manufacturer with either Quasar 570 or Quasar 670 dyes, as using orange and red emitters minimizes background from autofluorescence in the NMJ.

We thank Talila Volk (Weizmann Institute of Science, Rehovot, Israel) for the Msp300 antibody; Flybase and the Bloomington Drosophila Stock Center for resources. We also thank David Ish-Horowicz and members of the Davis lab for discussions and comments on the manuscript. This work was supported by a Wellcome Trust Senior Basic Biomedical Research Fellowship (096144) to I.D., Wellcome Trust Strategic Awards (091911 and 107457/Z/15/Z) supporting advanced microscopy at Micron Oxford (http://micronoxford.com), and a Clarendon scholarship to LY.