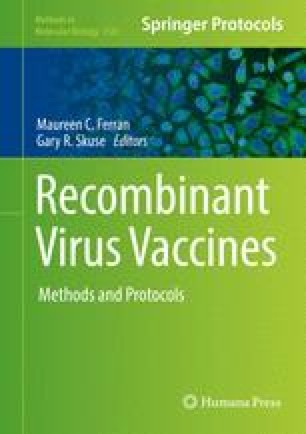 This chapter describes the development of recombinant measles virus (MV)-based vaccines starting from plasmid DNA. Live-attenuated measles vaccines are very efficient and safe. Since the availability of a reverse genetic system to manipulate MV genomes and to generate respective recombinant viruses, a considerable number of recombinant viruses has been generated that present antigens of foreign pathogens during MV replication. Thereby, robust humoral and cellular immune responses can be induced, which have shown protective capacity in a substantial number of experiments.

For this purpose, the foreign antigen-encoding genes are cloned into additional transcription units of plasmid based full-length MV vaccine strain genomes, which in turn are used to rescue recombinant MV by providing both full-length viral RNA genomes respective anti-genomes together with all protein components of the viral ribonucleoprotein complex after transient transfection of the so-called rescue cells. Infectious centers form among these transfected cells, which allow clonal isolation of single recombinant viruses that are subsequently amplified, characterized in vitro, and then evaluated for their immunogenicity in appropriate preclinical animal models.

Vaccines are the most effective way to prevent infectious disease in terms of safety and cost–benefit ratio. However, at present, the development of vaccines to the point of licensing for human use takes decades and sometimes has proven hardly possible as exemplified by the HIV pandemic. To minimize the time for vaccine development and to be safe, it is necessary to develop strategies that allow for the immediate initiation of standardized vaccine development, leading to successful and safe candidate vaccines in a minimal amount of time. One strategy is to use well-known, already authorized vaccines with exceptional safety and efficacy records as a platform to present critical antigens of the pathogen which is the focus of vaccine development. Thereby, efficacious immune responses are triggered in immunized animals and patients not only against the vaccine vector, but also against the additionally present extra antigen. One of these potential vaccine platforms currently under development are recombinant vaccine strain-derived measles viruses.

Unmodified live-attenuated measles virus (MV) vaccine strains are efficient replicating vaccines. Besides revealing an excellent safety record, both humoral and cellular immune responses are elicited, which are responsible for long-lasting protection [1, 2, 3]. Therefore, the WHO targets eradication of measles by using these vaccines [4]. The vaccine’s manufacturing process is extremely well established [5] and millions of doses can be generated quite easily and quickly. Generation of recombinant MV from DNA via reverse genetics became feasible [5] and allows for the robust expression of different antigens, as outlined below, during replication of the modified recombinant MV vaccine viruses.

Thereby, generally robust immune responses against vector and foreign antigens are induced after vaccination of transgenic MV-susceptible IFNAR−/−-CD46Ge mice [6], nonhuman primates, or human patients (see Table 1) indicating the high efficiency of the system. Interestingly, pre-vaccinated animals with protective immunity against measles were still amendable to vaccination with the recombinant MV, since significant immune responses against the foreign antigen(s) are still induced [7, 8]. Also in human probands, levels of antibodies against chikungunya virus (CHIKV) Env antigens did not display a negative correlation with preexisting antibody levels against the MV vector backbone [9].

A plethora of different antigens of various viruses and of one bacterium have been cloned into recombinant MV genomes, and the respective recombinant viruses have already been rescued. These projects are summarized in the following table (Table 1).
Table 1

As depicted, mainly structural proteins, especially viral envelope glycoproteins have been expressed as antigens by the yet generated recombinant MV-derived vaccines, simply due to the expectation that especially humoral immunity against these antigens may result in neutralizing antibodies with protective capacity. However, the vector system proved also capable to induce robust cellular immune responses . Moreover, also secreted, cytoplasmic, or membrane bound markers, such as different luciferases, GFP , lacZ [13], or cellular proteins such as carcinoembryonic antigen (CEA) [41] can be expressed by recombinant MV as demonstrated during its characterization and application as a potential oncolytic virus. Even membrane pore proteins such as the sodium iodide symporter (NIS) [42] and up to three different transgene cassettes with a size potentially exceeding 5 kb [13] have been successfully expressed by recombinant MV, demonstrating the general versatility of this vector system.

The targeted viruses span a couple of genera and families. Also the developmental stage of the different vaccines is quite diverse, ranging from the demonstration of successful antigen expression by the recombinant MV, spanning the demonstration of humoral or cellular immunogenicity against the encoded antigen up to demonstration of the vaccine’s protective efficacy in appropriate pre-clinical animal models. Of note, recombinant MV encoding the glycoprotein antigens of Chikungunya Virus, MV-CHIKV , has already been tested in a clinical phase I study in human volunteers [9]. After demonstrating efficacy in appropriate mouse and primate animal models [8], this recombinant vaccine delivered proof of principle for safety and immunogenicity in human patients, irrespective of preformed anti-measles immunity [9].

Thus, the route for clinical development of such recombinant, MV-derived vaccines is open. On the one hand, these recombinant vaccines may be valuable to be used during primary measles vaccination to immunize children simultaneously against measles and a secondary pathogen of concern for the respective pediatric population without the need to vaccinate these children with two different vaccines. As an example, MV expressing hepatitis B virus small antigen (HBsAG) may be used in regions with high HBV prevalence to protect children early on from this potentially chronic infection (“buy one, get one free” strategy).

On the other hand, recombinant MV is one of the potential vaccine platforms that can be used for the (fast track) development of vaccines against emerging pathogens, for which fast availability of a vaccine may be critical. In this respect, our MV-derived vaccine against the corona virus responsible for the Middle East Respiratory Syndrome (MERS-CoV) expressing the MERS-CoV glycoprotein S [38] has been among the first and most progressed vaccine candidates, which were evaluated by the Saudi Arabia Ministry of Health [43] and the WHO [44].

Carry out all procedures aseptically under laminar flow and at room temperature unless otherwise specified. Eukaryotic cells are generally cultured at 37 °C, 5% CO2, and 95% humidity in an incubator.

The authors are indebted to R. Cattaneo for introduction into the exciting field of recombinant MV and thank U. Schneider for providing the PolII Rescue System. The project was supported by Federal ministry for Education and Research of Germany (BMBF) grant 031A010B (M.D. Mühlebach).