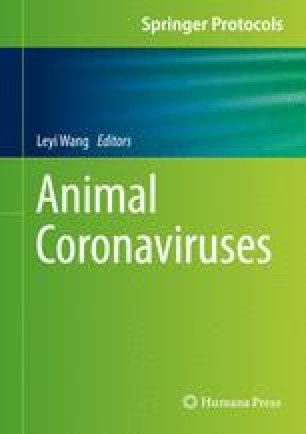 Turkey coronavirus (TCoV) infection continues to threaten turkey industry. Because specific treatment and effective vaccination program are not available, rapid and cost-effective detection of antibodies to TCoV infection is an important control measure to monitor the disease status in the fields. Two antibody-capture enzyme-linked immunosorbent assay (ELISA) procedures for detection of antibodies to TCoV are outlined in this chapter. One ELISA method uses chicken infectious bronchitis coronavirus (IBV) as the coating antigen based on antigenic cross-reactivity between TCoV and IBV. The other method relies on a recombinant TCoV nucleocapsid protein. Both methods are useful for serological diagnosis of TCoV infection in the turkey flocks.

Turkey coronavirus (TCoV) causes an acute and highly contagious enteric disease affecting turkeys of all ages [1, 2]. TCoV is an important pathogen and remains as a serious threat to the turkey industry. There is currently no specific treatment or effective vaccine for TCoV infection. In order to rapidly diagnose and effectively control turkey coronaviral enteritis, serological diagnosis of antibodies to TCoV becomes a critical tool to determine the infectivity of turkeys in the turkey flocks.

Immunofluorescent antibody assay (IFA) for detection of anti-TCoV antibodies has been extensively used for disease outbreaks in the fields. However, IFA procedures are time consuming and labor intensive for handling large numbers of samples. In addition, IFA requires highly trained personnel to prepare frozen sections of turkey or turkey embryo intestines and perform fluorescent microscopy.

ELISA method has high specificity and sensitivity and can be applied to large numbers of samples simultaneously. Two ELISA procedures are highlighted in this chapter. One ELISA method utilizing infectious bronchitis virus (IBV) as a coating antigen for detection of antibody to TCoV is based on antigenic cross-reactivity between TCoV and IBV [3]. The other antibody-capture ELISA uses a recombinant TCoV nucleocapsid (N) protein as a coating antigen [4, 5].

Nucleocapsid protein appears to be the most abundant viral polypeptide in coronavirus infected cells during all stages of infection. Nucleocapsid protein is detected from 3 to 5 h after infection, at the same time or earlier than the other structural proteins. The only known posttranslational modification of coronavirus N proteins is phosphorylation [6]. The coronavirus N protein is immunodominant [7]. Subcloning of the TCoV N gene to a prokaryotic expression system has resulted in a high-level induction of recombinant protein in our laboratory [4]. The recombinant TCoV N protein expressed from the prokaryotic system is expected to maintain its antigenic integrity because it is not glycosylated.

2.1 ELISA with IBV as Coating Antigen

3.1 ELISA with IBV as Coating Antigen

Logistic regression analysis: ELISA value of serum samples from the field turkey flocks as positive or negative for TCoV by IFA are compared. The cutoff point is calculated from the logistic equation ln[P/(1 − P)] = β1X + β0, where X is the ELISA value. At the optimum cutoff point of the ELISA value, the probability of the sample being negative (P) would be the same as the probability of the sample being positive (1 − P), i.e., P = 1 − P = 0.5 or 50 %. The cutoff point is determined by solving 0 = β1X + β0 for X (ln[0.5/(1 − 0.5)] = ln(1) = 0). Logistic regression is used to estimate the coefficients β1 and β0. Statistical computations are performed using SAS program. The sample numbers (N) of IFA positive and negative population should be at least 30.

IFA negative population: ELISA values of serum samples (N ≥ 30) from the field turkey flocks as negative for TCoV by IFA are populated. Outliers are removed by statistical methods such as Box-plot. Mean and standard deviation (SD) of ELISA values are calculated from the remaining samples. Cutoff point can be calculated for 95 % confidence interval as mean plus 1.645 SD (mean + 1.645 × SD) for an estimated 5 % false positive rate.

Fix OD reading: a fixed OD reading as cutoff point is not appropriate due to normal reading fluctuations between batch runs, between analysts, between days, between laboratories.

Data normalization of raw OD readings with a suitable positive control sample is necessary for appropriate interpretation of unknown samples. Comparison of results from different laboratories is difficult due to the lack of standardized reagents. Data normalization with a standard source of PC may be a helpful factor to narrow down the comparability of results from different laboratories.

For data normalization, the reading of LPC is suggested in the calculation of ELISA value or S/P ratio of each test serum.

The protocol “Antibody-capture enzyme-linked immunosorbent assay for detection of antibody to turkey coronavirus using infectious bronchitis virus or recombinant nucleocapsid protein as coating antigen” outlined in this chapter had been successfully carried out in the authors’ studies on characterization, immunology, and diagnostic serology of turkey coronavirus infection in turkeys. Those studies were in part financially supported by USDA, North Carolina Poultry Federation, and/or Indiana Department of Agriculture and technically assisted by Drs. Tom Brien and David Hermes, Mr. Tom Hooper, and Ms. Donna Schrader in clinical and diagnostic investigation, virus isolation and propagation, and animal experimentation.