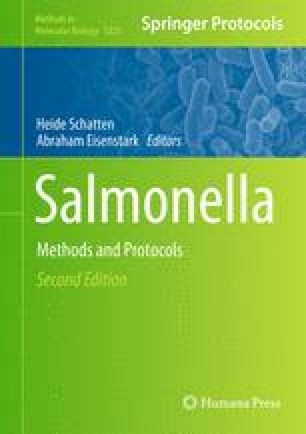 Quantitative proteomics, based on stable isotope labeling by amino acids in cell culture (SILAC), can be used to identify host proteins involved in the intracellular interplay with pathogens. This method allows identification of proteins subject to degradation or upregulation in response to intracellular infection. It can also be used to study intracellular dynamics (trafficking) of proteins in response to the infection. Here, we describe the analysis of changes in protein profiles determined in Golgi-enriched fractions isolated from cells that were either mock-infected or infected with Salmonella typhimurium. Using the SILAC approach we were able to identify 105 proteins in Golgi-enriched fractions that were significantly changed in their abundance as a result of Salmonella infection.

In the last decade a powerful quantitative proteomic approach has been developed in which proteins are marked using stable isotope labeling by amino acids in cell culture (SILAC). This technique was developed by Ong et al. [1] in 2002 and makes use of in vivo incorporation of stable isotopes allowing mass spectrometry (MS)-based quantitative proteomic analyses. Typically, two cell pools are used for SILAC experiments: one with cells grown in normal medium (containing the “light” amino acids) and one with cells in medium in which one or two essential amino acids are replaced by the “heavy” isotope forms of these amino acids, allowing for the identification of peptides from each sample in MS-MS spectra. After a few cell passages, all proteins produced by the cells in the “heavy” medium have incorporated the “heavy” amino acids. Cells in the “light” and “heavy” medium can then be treated differently, e.g., treated versus non-treated or infected versus non-infected cells. The cells from both treatments are then combined in a 1 to 1 ratio and differences in protein abundance due to the treatment can be assessed and quantified by MS (Fig. 1) [2]. SILAC has become a powerful tool to investigate changes in the host cell proteome upon infection with an intracellular pathogen, allowing elucidation of host–pathogen interactions [3, 4, 5, 6, 7, 8, 9].

Most proteomic approaches published so far deal with the analysis of cellular proteomes of total cell lysates rather than specific cellular compartments [6, 7, 9]. However, a major advantage of using quantitative proteomics to study host–pathogen interactions is the ability to fractionate the samples before analysis. In this way, specific compartments of the host cell, such as the organelles that make up the secretory pathway, can be studied.

In this chapter we describe the procedure recently used in our lab [10] to investigate Salmonella–host interactions in more detail by using a quantitative proteomics approach (SILAC) in combination with cell fractionation. We compared the protein profiles of isolated Golgi-enriched fractions from cells that were either infected with S. typhimurium or mock-infected. After statistical analysis, 105 proteins were identified that were significantly changed in their abundance in the Golgi-enriched fraction upon Salmonella infection. This technique was also previously applied in our laboratory to investigate interactions of coronaviruses with the host secretory pathway [11].

Carry out all procedures at room temperature unless otherwise specified.

This step describes how the HeLa cells are cultured and kept in culture before performing experiments. Specific requirements for HeLa cells, necessary for the experiments, are described in the paragraphs of the respective experiments.

This step describes how an infection of HeLa cells with Salmonella bacteria is performed in general [12]. Specific adjustments made in the experiments are described in the protocols of these experiments.

This step describes how labeling of HeLa cells works in general. Before performing SILAC experiments, it must be ensured that cells are labeled completely and how many passages this takes to accomplish. Therefore, this should be tested using the protocol below. Upon complete incorporation of labeled amino acids, the protocol described here results in peptide mass shifts of 8 and 10 amu for each lysine and arginine in the peptide, respectively.

The SILAC procedure, which was described by Ong et al. [1], are performed with certain adjustments as we describe below and as was published previously [10, 11].

The 24 gel slices are subjected to in-gel tryptic digestion as described below (see Note 23 ) and before [8]: