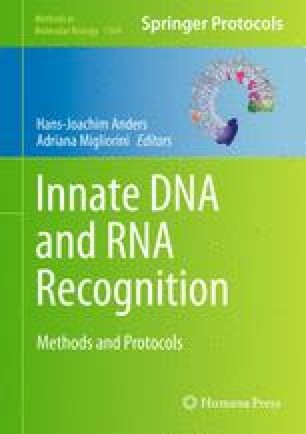 Detection of RNA Modifications by HPLC Analysis and Competitive ELISA

Over 100 different RNA modifications exist that are introduced posttranscriptionally by enzymes at specific nucleotide positions. Ribosomal RNA (rRNA) and transfer RNA (tRNA) exhibit the most and diverse modifications that presumably optimize their structure and function. In contrast, oxidative damage can lead to random modifications in rRNA and messenger RNA (mRNA) that strongly impair functionality. RNA modifications have also been implicated in avoiding self-RNA recognition by the immune system or immune evasion by pathogens. Here, we describe the detection of RNA modifications by HPLC analysis and competitive ELISA.

Over 100 different RNA modifications have been identified and exist in all three kingdoms of life. A comprehensive listing of posttranscriptionally modified RNA nucleosides is found in the RNA Modification Database (http://mods.rna.albany.edu/) [1].

Interestingly, also messenger RNA (mRNA) is internally modified and carries N6-methyladenosine (m6A) [7]. m6A is present in mRNA of all higher eukaryotes tested, including mammals, plants, and insects. This modification occurs on average at 1–3 residues within a defined sequence context (e.g., GGACU) per typical mammalian mRNA molecule [7]. Recently it has been reported that m6A sites are enriched near stop codons and in 3′ UTRs suggesting an important role in regulation of gene expression [8, 9].

Random RNA modifications may also occur by oxidation through reactive oxygen species (ROS) which are involved in killing of bacteria and cell signaling pathways [10, 11, 12]. Over 20 different purine and pyrimidine modifications formed by reactive oxygen species are known; however, 8-hydroxyguanosine (8-OHG) is the most prominent modification [13]. Of note, 8-hydroxyguanosine modification in mRNA leads to reduced protein levels and altered protein function due to ribosome stalling [14]. Interestingly, age-associated oxidative damage to RNA has been demonstrated in neurons and may play a role in neurodegeneration and other diseases [15].

The effect of ribonucleoside modifications on immunostimulation has been investigated only recently. RNA modifications such as 2′-O- or base methylation and the occurrence of pseudouridine negatively modify the immunostimulatory potential of in vitro transcribed RNA with respect to TLR3, TLR7, and TLR8 [22]. Also pseudouridine-containing or 2′-O-methylated synthetic RNA loses its immunostimulatory capacity via RIG-I [19]. We and others have further demonstrated that 2′-O-methylation of synthetic RNA and tRNA not only renders TLR7 ligands non-immunostimulatory but also converts modified RNA into a TLR7 antagonist [23, 24, 25].

Eukaryotic mRNA is not recognized by RIG-I or MDA5 due to a 5′ cap structure methylation at the N7 position of the capping guanosine residue (cap 0), and additional 2′-O-methylation(s) at the 5′-penultimate residue (cap 1) and sometimes also at adjoining residue (cap 2). Interestingly, some viruses that replicate in the cytoplasm (e.g., picornaviruses and coronaviruses) encode functions associated with the formation of a 5′ cap, which are homologous to those found in eukaryotic cells and also support immune evasion. Accordingly, 2′-O-methylation of viral mRNA cap structures by virus-encoded methyltransferases prevents recognition by MDA-5 or host restriction by interferon-induced proteins with tetratricopeptide repeats (IFIT) family members [26, 27].

In summary, the detection and characterization of modified ribonucleosides are important for understanding mechanisms of RNA-induced immune activation or immune evasion.

For detection of modified nucleotides in a given RNA sequence HPLC analysis of digested RNA is a suitable method with high sensitivity and specificity. Before starting the analysis, standard mixtures of nucleosides should be analyzed with the standard protocol to yield high resolution and reproducibility (see Note 7 ) (Fig. 1). The occurrence of RNA modifications within a RNA sample of interest (e.g., total RNA from a eukaryotic cell line) can be judged by comparison and overlay of the individual chromatograms (Fig. 1).

3.1.3 UV Spectra for Discrimination of Nucleosides

The nucleoside specific UV spectra are an additional characteristic that can be used to discriminate nucleosides. For example, adenosine, guanosine, and 8-hydroxyguanosine differ in the wavelength of maximum absorbance and number of peaks (Fig. 3a). A suitable UV detector connected to the HPLC system allows to record UV spectra and retention time simultaneously. Using the following protocol 8-hydroxyguanosine, which has two absorbance maxima at 248 and 294 nm, can be distinguished from guanosine by retention time and UV-absorbance (Fig. 3b).

Quantification can be achieved using the linear standard plot method [28].

For HPLC analysis the RNA of interest has to be cleaved into nucleotides by nuclease P1 and snake venom phosphodiesterase (SvP) with subsequent dephosphorylation by alkaline phosphatase (AP) to obtain nucleosides [29, 30].

The unknown 8-OHG samples or 8-OHG standards are added to an 8-OHG/BSA conjugate preabsorbed microtiter plate. Then an anti-8-OHG monoclonal antibody is added with subsequent detection by a secondary peroxidase-labeled antibody. The 8-OHG content in unknown samples is determined by comparison with the 8-OHG standard curve [31].