The Future of the Suburban City 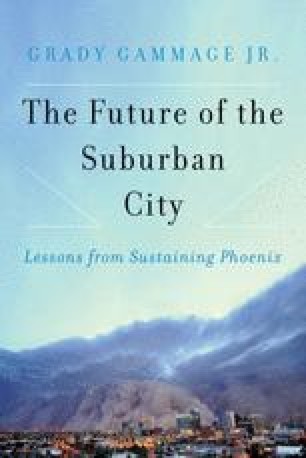 Climate change used to be called “global warming.” Both terms are still around, but the use of climate change has become far more prevalent. Global warming was a way to refer to the overall rise in average temperatures as a result of the greenhouse effect—man-made carbon dioxide spewed into the atmosphere, resulting in trapping more solar energy and heating up the planet. Climate change has a couple of advantages as a moniker. First, it conveys the possibility that it is not just warming to worry about, but also increases in things like hurricanes, tornadoes, and heavy precipitation caused by atmospheric changes. Second, it provides a simpler way of asserting: “I don’t know if it’s caused by humans or not, but clearly things are changing and we need to react.” Many scientists and commentators continue to use the terms interchangeably, sometimes choosing the term that will seem more (or less) threatening to the intended audience. If you want to worry people in Phoenix, global warming is your semantic choice.

Urban Heat Island Urban Heat Island Effect Urban Heat Island Intensity Federal Housing Administration Artificial Turf
These keywords were added by machine and not by the authors. This process is experimental and the keywords may be updated as the learning algorithm improves.
This is a preview of subscription content, log in to check access.