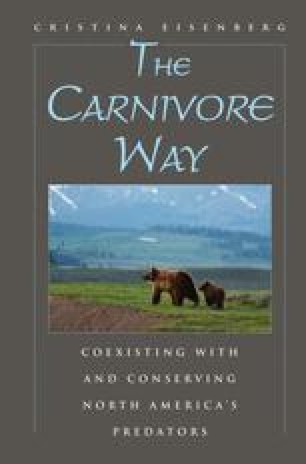 Pluie the wolf (Canis lupus) taught us that carnivores need room to roam. The details of how she lived from the time she was radio-collared in Kananaskis Country, Alberta, in 1991 until her death in 1995 illustrate the importance of carnivore conservation across political boundaries. For two years, biologists tracked her as she ranged over an area 40,000 square miles in size—ten times greater than Yellowstone. In the process, she moved through Banff National Park, where she was totally protected, to British Columbia, where she was liable to being hunted by humans. From there, she traveled south into the United States through Glacier National Park, where she was legally protected, and then into Montana, Idaho, and Washington, where environmental laws continued to protect her from being hunted or harmed. In 1993, she returned from the United States to British Columbia. There, a hunter’s bullet nicked her collar, but didn’t kill her—nevertheless, Pluie’s collar stopped transmitting signals. Beyond that point, researchers didn’t know whether the collar battery died or, indeed, what had become of her. Two years later in Invermere, British Columbia, a hunter legally killed her and her mate and their three pups.

Large Carnivore North American Free Trade Agreement Grizzly Bear Distinct Population Segment Carnivore Conservation
These keywords were added by machine and not by the authors. This process is experimental and the keywords may be updated as the learning algorithm improves.
This is a preview of subscription content, log in to check access.