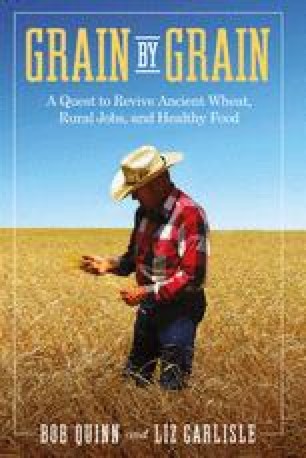 When I was growing up, my family ate a wide variety of local fruit. We had two crab apple trees in our yard, and my grandfather had a plum tree. In the summertime, we looked forward to the wild berries that grew on bushes in our coulees. The first berries to ripen were serviceberries, also called Juneberries, because they matured in late June or early July. Next were the wild currants: black currants, red currants, yellow currants, all of which came on in mid-July. By early August, we could pick chokecherries, which people mostly used for pancake syrup because they had such a strong, astringent flavor. Last were the buffalo berries, which were best after frost. Those were very potent, packed with vitamins and antioxidants. Native people in this area used many of these berries in pemmican—a dried buffalo meat staple that served as the superfood of the northern Great Plains for many generations.

Cite this chapter as:
Quinn B., Carlisle L. (2019) Taste of Place. In: Grain by Grain. Island Press, Washington, DC