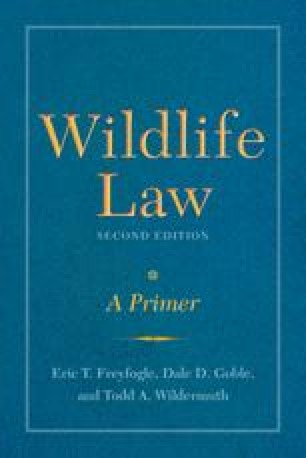 Wildlife on federal lands has long drawn considerable attention, and with good reason. The landholdings of the federal government are massive— some 30 percent of the nation’s surface—including vast expanses of vital wildlife habitat. What is the legal status of the wildlife on these lands? Who has the legal authority to manage it? And what are the rules currently in place? These are the questions taken up in this chapter in the context of the four largest categories of federal lands: the wildlife refuges run by the US Fish and Wildlife Service, the variously named holdings of the National Park Service, the national forests, and the diverse lands administered by the Bureau of Land Management (BLM). Together these four categories comprise more than 96 percent of all federal landholdings. The wildlife laws applicable to these lands differ among the four categories and thus call for separate consideration. Before exploring them, however, it is useful to understand the basic legal framework that applies on nearly all federal lands.