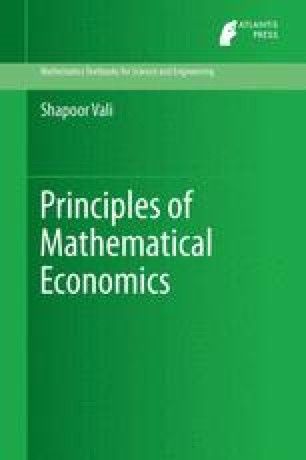 Mortgage Loan Budget Equation Household Budget Repeat Part Mortgage Payment
These keywords were added by machine and not by the authors. This process is experimental and the keywords may be updated as the learning algorithm improves.
Download chapter PDF

A household allocates its income to variety of goods and services. A collection of goods and services that a household purchases and consumes over a specific time period or horizon (a week, a month, or a year) is called a consumption bundle (bundle for short), or a basket. Assume that a household’s annual bundle consists of \(n\) different goods and services. If we denote the quantity of the \(i\)th item purchased by this household by \(\;Q_i \;\;\,i=1,2,\,...,\,n,\;\) and the corresponding price of each unit of \(Q_i\) by \(P_i\), then we can write the household’s expenditure \(E\) as
$$\begin{aligned} E = P_1Q_1+P_2Q_2+P_3Q_3+\cdots + P_nQ_n \end{aligned}$$
or more compactly, using summation or sigma notation,1 as
$$\begin{aligned} E = \sum _{i=1}^{n} P_i Q_i \end{aligned}$$
If we denote the household’s annual income by \(I\), then
$$\begin{aligned} E = P_1Q_1+P_2Q_2+P_3Q_3+ \cdots + P_nQ_n \le I \end{aligned}$$
or, using sigma notation
$$\begin{aligned} E = \;\sum _{i=1}^{n} P_i Q_i \; \le I \end{aligned}$$
(1.1)
is the household budget constraint. Strict equality in (1.1) implies that this household spends all its income on its bundle and finishes the year without any savings. In this case future improvement in the standard of living of this household, as partly measured by purchase of additional quantity of current goods and services and/or consumption of new items not currently in the bundle, must be supported by future additional income.
Strict inequality, on the other hand, implies that this household saves part of its income. In that case we can include an item S, dollar amount or quantity of savings with the associated price of 1, to the household’s bundle and rewrite (1.1) as
$$\begin{aligned} \sum _{i=1}^{n} P_i Q_i + S = I \end{aligned}$$
(1.2)
If household’s unspent income is invested in interest bearing, income generating, and wealth enhancing asset(s), then future improvement of household’s standard of living could be partially financed by savings. For example, if rate of interest is \(r,\) then the next period income of this household would increase from \(I\) to \(I + rS\).
The third (and not uncommon) possibility for household’s budget equation is
$$\begin{aligned} \sum _{i=1}^{n} P_i Q_i \; > \; I \end{aligned}$$
(1.3)
This implies that this household runs a “budget deficit” and its current consumption must be partially supported by “borrowing”. By denoting the dollar amount of this borrowing by B with the associated price of 1, we can rewrite (1.3) as
$$\begin{aligned} \sum _{i=1}^{n} P_i Q_i = I + B \;\;\; \rightarrow \;\;\;\sum _{i=1}^{n} P_i Q_i - B = I \end{aligned}$$
(1.4)
If there is no prospect for future higher income, this situation is, of course, not sustainable. \(B\) in (1.4) does not necessarily represent only the amount of borrowing, but rather the interest payment and partial repayment of borrowed amount. A typical example is home mortgage loan. When a household purchase a house it typically borrows a substantial portion of value of the house from a bank or a mortgage company at certain interest rate, called mortgage rate. In this case household monthly expenditures will include a new item “mortgage payment”, which is a combination of interest and partial repayment of initial amount borrowed, called the principal. In a 25-year fixed mortgage loan, the fixed monthly mortgage payment is structured such that over 300 payments the borrower pays off the loan, principal plus interest (learn more about mortgage loans in Chap.  12 Mathematics of Interest Rate and Finance).

Consumer Expenditure Survey data records how consumers allocate their spending to different consumer goods and services. According to Table 1.1 the number of households (in BLS’s terminology number of consumer units) in the US in 2010 was 121,107,000 with average size of 2.5 persons. Average income before tax (average gross income) of the households is reported as $62,481 and the average expenditure as $48,109. As a clear evidence of the “great recession”, for the first time since 1984 consumer spending registered a drop of 2.8 % in 2009 from 2008 and 1.95 % in 2010 from 2009. Loss of income have forced consumers to further cut back in their consumption expenditure in 2010, specially for entertainment and food. With the average saving rate of the American households negligibly small, it is safe to say that a major portion of the difference between average gross income and expenditure is the average annual amount of taxes households paid to various levels of government—local, state, and federal.
Table 1.2

Transportation and food are the next two big items. While the share of Transportation from the household’s total expenditure is 15.96 % (an 11 % decline in 2009 from 2008), gasoline and public transportation costs constitute only 4.4 and 1.0 % of expenses, respectively. A combination of deep recession and historically high gas price has lead, for the first time, to a decline in gasoline consumption in 2009 compared to 2008. The data, however, indicates that while other industrially advanced nations have cut their oil consumption since 1980 (Sweden and Denmark by as much as 33%), U.S. oil consumption has increased by more that 21 %. The United States still has the lowest gasoline price in the industrial world.

Appendix A: A Short Note on Sigma Notation

An economical and convenient method for writing long sums is the use of summation or sigma notation. The upper case Greek letter sigma \(\sum \) (counterpart of S, the first letter of Sum) is employed to denote sums, hence the ‘sigma notation’.

© Atlantis Press and the authors 2014