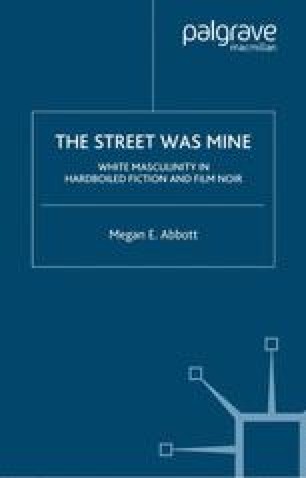 “Nothing You Can’t Fix”

The first image of the famed 1946 film version of James M. Cain’s The Postman Always Rings Twice is of a hand-painted sign reading “Man Wanted.” When hobo Frank Chambers (John Garfield) takes the position to which the sign refers, lured in by the site of the luscious Cora (Lana Turner), he burns the sign. A man was wanted, and now he is there to do the job: eliminate the weak older man and sexually overpower the young wife. Of course, the question of who has ensnared whom—a question fundamental to much of film noir—persists through the entire film. Is the sign “Man Wanted” an expression of lack begging fulfillment, or is it a siren song? Is the tough vagabond Frank bringing a masculine promise to the Twin Oaks Tavern, or is he leaving behind the freedom of the road to be trapped in a doomed and dooming domesticity?

White Woman Source Text Film Version Star Power Existential Solitariness
These keywords were added by machine and not by the authors. This process is experimental and the keywords may be updated as the learning algorithm improves.

“But pictures and books are different, naturally.”

—Raymond Chandler in a letter to Dale Warren1