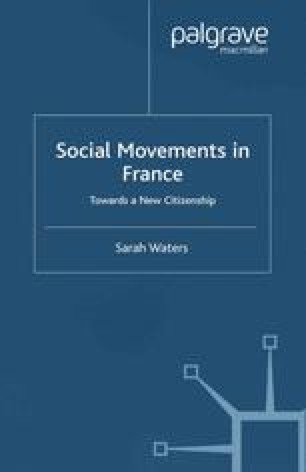 France, for many observers, is no longer a nation marked by high levels of conflict where citizens routinely take to the streets to express their grievances and desires. And France is no longer a nation where movements in society constitute a powerful force, challenging political authority and furthering social change. Gone is the quest for a better society. Gone is the revolutionary impetus of past struggles. In today’s society, people have apparently turned away from politics and are no longer prepared to engage in collective struggles and causes. They are less inclined to get involved in matters that lie outside their own private interests and desires. For their part, social movements have seemingly lost their traditional meaning and importance. The overwhelming view is that movements have disappeared or at the very least have ceased to act as forces of contestation and dissent. Where new movements do emerge in society, they are rarely seen to advance a projet de société, a general programme for social change. Nor do they espouse a unified ideological vision, a comprehensive theory of society. These are inward-looking, particularist or even tribal elements that act against rather than for the collective good. Withdrawn from the public sphere, they are a symbol of the ceaseless tide of fragmentation and individualism that has swept through contemporary society, of its degeneration into an ‘era of nothingness’.1

Social Movement Public Sphere Political Life Contemporary Society Ordinary Citizen
These keywords were added by machine and not by the authors. This process is experimental and the keywords may be updated as the learning algorithm improves.
This is a preview of subscription content, log in to check access.