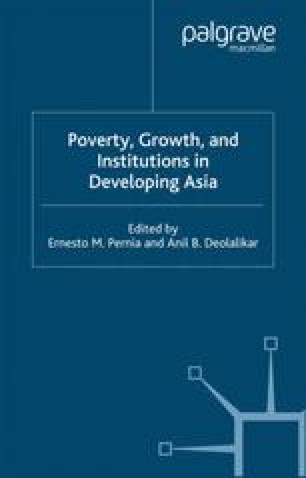 Poverty, Growth, and Institutions in Developing Asia pp 137-188 | Cite as

The term “decentralization” has been variously used to refer to the privatization, deconcentration, or devolution of political, administrative, and fiscal powers. Decentralization as used here, however, refers only to devolution, whether or not powers are transferred simultaneously or in varying degrees. This chapter focuses on whether decentralization has helped the poor in asia, and on the mechanisms through which the poor have benefited. Although several asian countries have experimented with decentralization, experiences have varied considerably in their extent, forms and outcomes. I several cases, the political dimension was dominant, with changing political circumstances and coalitions shaping the process of decentralization in important ways. By contrast, economic conditions were less crucial in decisions to decentralize.

Local Government Central Government Poverty Reduction Poverty Alleviation Fiscal Decentralization
These keywords were added by machine and not by the authors. This process is experimental and the keywords may be updated as the learning algorithm improves.
This is a preview of subscription content, log in to check access.