Democracies and the Populist Challenge 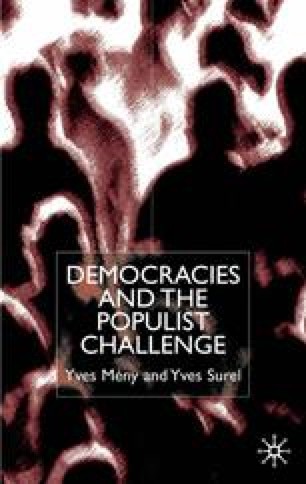 Democracies and the Populist Challenge pp 25-44 | Cite as

Taking Politics to the People:Populism as the Ideology of Democracy

Although populist1 movements are usually sparked off by specific social and economic problems, their common feature is a political appeal to the people, and a claim to legitimacy that rests on the democratic ideology of popular sovereignty and majority rule. Analyses of populism often point to the tension within western democracy between this populist tradition and liberal constitutionalism. Certainly, there are difficulties in reconciling the project of giving power to the people with the drive to restrain power within constitutional limits, but concentration on this particular problem leaves unexplained the enduring strength of populist-democratic ideology and the ways in which it sustains populist movements. In this chapter I will argue that in order to understand populism we need to be aware of a complex and elusive paradox that lies at the heart of modern democracy. Crudely stated, the paradox is that democratic politics does not and cannot make sense to most of the people it aims to empower. The most inclusive and accessible form of politics ever achieved is also the most opaque. Precisely because it is the most inclusive form of politics, democracy needs the transparency that ideology can supply, and yet the ideology that should communicate politics to the people cannot avoid being systematically misleading.

Majority Rule Populist Movement Direct Democracy Democratic Politics Communicative Power
These keywords were added by machine and not by the authors. This process is experimental and the keywords may be updated as the learning algorithm improves.

Our government has lost touch with the people. (Ross Perot in Westlind 1996, 175)

The parties and governments in most countries in Europe are isolated from their people.(Jörg Haider 1995, 88)

What are democratic processes but the people? (George Wallace in Lipset and Raab 1971, 355)