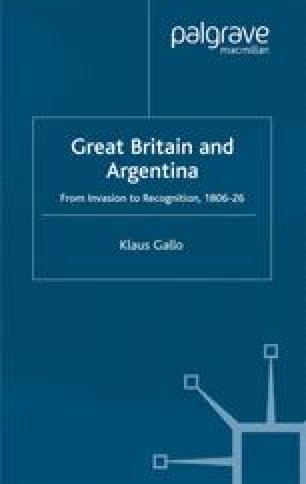 The River Plate is the name given to the river that flows past Buenos Aires into the Atlantic Ocean. It was also the name assigned to the territory which today forms the Argentine Republic. The river was discovered by Juan Díaz de Solis in 1516, who named it the Mar Dulce. This is considered as the traditional date of discovery. In 1520, Fernando de Magallane’s expedition explored the Argentine coast from the River Plate to the strait that bears his name. From this voyage comes the first description of Patagonia. Magallane also discovered the river Uruguay. This expedition was followed by that of Sebastian Cabot in 1527–29, which explored the Paraná river and founded Fort Sancti Spiritus, the first Spanish settlement in River Plate territory. The Portuguese visited the River Plate for the first time in 1531, and thus gave the Spaniards the incentive to occupy the area. In 1536 the Spanish Crown sent out the adelantado Pedro de Mendoza, who founded Buenos Aires in the same year. In 1541, however, Buenos Aires was abandoned, a victim of hunger, disease, and Indian attacks. The settlers oved to Asunción, the present capital of Paraguay, which became the new centre of Spanish settlement and government.

Prime Minister Yerba Mate East India Company Spanish Coloni American Coloni
These keywords were added by machine and not by the authors. This process is experimental and the keywords may be updated as the learning algorithm improves.
This is a preview of subscription content, log in to check access.